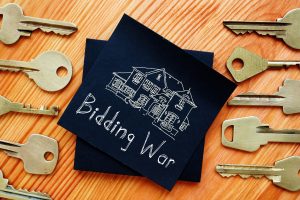 In September, 58.9% of home offers written by Redfin agents faced competition, a record low for 2021, according to a new report. That's down from a revised rate of 60.8% in August and a peak of 74.3% in April. September marked the fifth consecutive month of declines, putting the bidding-war rate on par with the level seen a year earlier (58.3%).

The housing market has been cooling due to a typical seasonal slowdown, which has helped ease competition, but homes are still selling faster than usual for this time of year, with continued demand fueled by an ongoing shortage of homes for sale. New listings fell 9% year-over-year in September, according to Redfin, and the typical home that sold went under contract in 18 days—more than a week faster than a year earlier.

"It's typical to see a decline in competition as families head back to school and the weather cools down," said Redfin Deputy Chief Economist Taylor Marr. "Buyers also aren't having to offer as much above the asking price as they were in the spring, when competition in the housing market was peaking. As mortgage rates continue to rise, we can expect bidding wars to keep slowing."

Supply chain issues linger for homebuilders as materials remain an issue and have contributed to the nation’s lack of housing inventory.

Testifying last week before the House Small Business Subcommittee on Oversight, Investigations, and Regulations, National Association of Home Builders (NAHB) Chairman Chuck Fowke explained to lawmakers that disruptions in the building materials supply chain that have been exacerbated by the pandemic are having a disproportionate impact on smaller home building firms.

“Without large economies of scale, small businesses generally cannot negotiate bulk discounts on lumber and other key building materials,” said Fowke. “The effects of this uncertainty trickle all the way to the buyer, many of whom have balked at projects at the last minute due to unexpected price increases.”

Raleigh, North Carolina had the highest bidding-war rate of the 45 U.S. metros, with 73.9% of offers written by Redfin agents facing competition in September. This was followed by Boston at 71.7%, and Indianapolis at 71.4%, Sacramento, California at 70.5%, and San Diego, California slightly lower with 70.3% rounding out the top five.

"Fall in Jacksonville is historically a slow time, as fewer people are looking to move," said Heather Kruayai, a Redfin Agent in Jacksonville, Florida, where the bidding-war rate dropped to 50% in September from 71.4% in August. "Even though there aren't as many bidding wars, listings are still selling quickly, so it's busier than previous years. During the spring and summer, I would get listings that would receive 30 offers within 24 hours of hitting the market and people offering as much as $70,000 over the asking price. That's not as common now."

In September the five markets reporting the lowest bidding-war rates were Milwaukee, Wisconsin at 24.1%; Sarasota, Florida with 39.1%; Hartford, Connecticut at 39.1%; Virginia Beach, Virginia at 41.5%; and Cleveland, Ohio at 44.8%.