Pending home sales trailed off for the fourth consecutive month in September, according to the National Association of Realtors. Additionally, all four major regions recorded month-over-month and year-over-year declines in transactions.

The Pending Home Sales Index (PHSI), a forward-looking indicator of home sales based on contract signings, slumped 10.2% to 79.5 in September. Year-over-year, pending transactions slid by 31.0%. An index of 100 is equal to the level of contract activity in 2001.

"Persistent inflation has proven quite harmful to the housing market," said NAR Chief Economist Lawrence Yun. "The Federal Reserve has had to drastically raise interest rates to quell inflation, which has resulted in far fewer buyers and even fewer sellers." 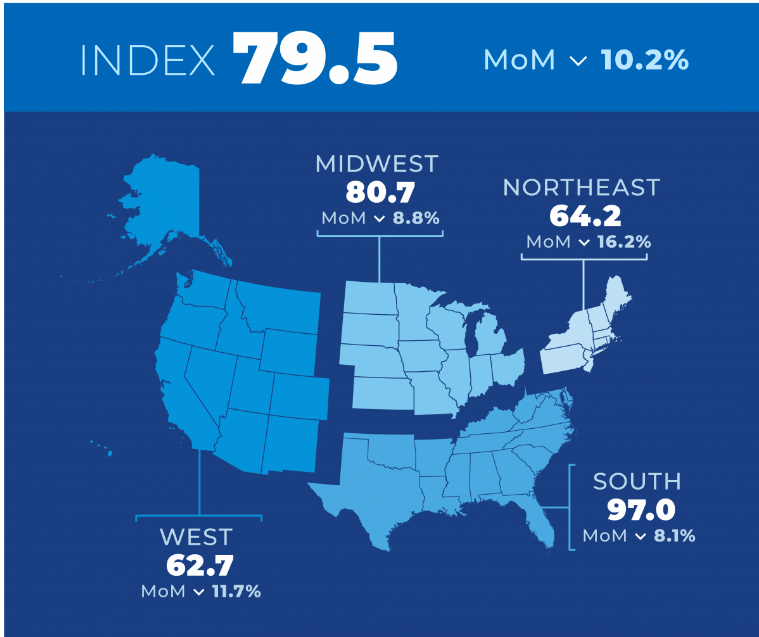 “Pending-home sales plummet 10.2% in September, largest month-over-month decline since the start of the pandemic," said First American Chief Economist Mark Fleming. "This is not surprising as mortgage rates recent increase toward 7% and beyond dampened affordability and likely buyer enthusiasm, pending another round of rate increases by the Federal Reserve next week.”

Yun also noted that new home listings are down compared to one year ago since many homeowners are unwilling to give up the rock-bottom, 3% mortgage rates that they locked in prior to this year.

"The new normal for mortgage rates could be around 7% for a while," Yun added. "On a $300,000 loan, that translates to a typical monthly mortgage payment of nearly $2,000, compared to $1,265 just one year ago – a difference of more than $700 per month. Only when inflation is tamed will mortgage rates retreat and boost home purchasing power for buyers."

Previous: Case Study: Impact of Flood Risk on Property Values
Next: Is This the Next Generation of Servicing?