After an opening night reception Sunday evening, NPPC kicked off in full Monday morning with a welcome speech from Safeguard Properties CEO Alan Jaffa. Continuing the legacy of Safeguard’s founder, the late Robert Klein, the National Property Preservation Conference brings together a cross-section of industry stakeholders to brainstorm on challenges such as natural disaster response, regulatory compliance, and more.

"I’m always energized by this conference and what it provides for our MCS team as well as the industry," said MCS CEO, Caroline Reaves. "It’s the one time each year when we all get together and focus solely on property preservation. The MCS team always looks forward to this conference, as it provides an opportunity for open, honest dialogue with our peers in the industry."

Dr. Benjamin Carson, Secretary of the Department of Housing and Urban Development, announced last week that HUD was implementing changes to annual eligibility certifications, loan limit certifications, and defect taxonomy under the Act, alterations which were designed to bring more depository lenders back to originating FHA loans.

Commissioner Montgomery told the crowd that HUD had been engaged in an ongoing dialog with the Justice Department from “day one” of the Trump administration regarding how to better manage the False Claims Act. Montgomery added that HUD had felt strongly that the annual eligibility certifications, loan limit certifications, and defect taxonomy changes all needed to be addressed at the same time. 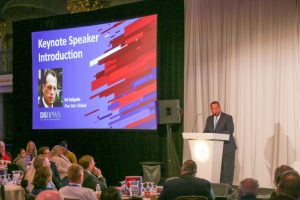 Facing hurdles such as a government shutdown in the midst of this process, Commissioner Montgomery said the work on the False Claims Act revisions gained a new head of steam under Attorney General William Barr. After revising an initial document of proposed changes down from “around 12 pages to around six or seven pages,” HUD and the DOJ were able to come to a consensus, Commissioner Montgomery said.

Speaking of the changes and the revised procedure for handling False Claims Act cases, Commissioner Montgomery said, “It’s a good suite of products, because it speaks to when something has materiality, and it’s a very prescribed set of circumstances.”

Delgado also hosted his annual “State of the Industry” panel. This year, he was joined by industry leaders including:

The panelists discussed the most pressing challenges facing property preservation, including foreclosure rates, the fight against urban blight, technological innovations, and intervention practices.

“We live in a cyclical business,” Delgado said. “As much as we keep saying foreclosures are at 20 to 30-year lows … we’re starting to see some stress fractures in the housing economy that suggest that there is another trending cycle coming in.”

Jaffa explained how some government entities have taken an aggressive stance against mortgage servicers and lenders to remediate issues stemming from vacant properties. He suggested that the industry should be more proactive.

Caroline Reaves then gave an overview on the strength of the property preservation industry heading into 2020, and why now is the time for companies to be innovating.

“One of our clients said, ‘No one is innovative when you’re busy, because you don’t have time to be.’ We took that to heart,” Reaves said. “We’ve gone in and spent this time investing in technology.”

“We’ve put a lot of control and technology in place to make sure, as an industry, that we’re stronger, because [the economy] will turn,” Reaves continued.

The NPPC will continue through Tuesday, November 5, with more discussion and updates. Click here to learn more.