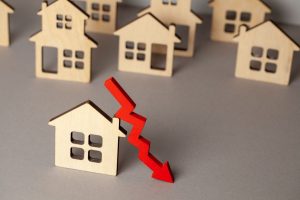 According to the new Knock Sellers-Buyers Market Index, of the top-100 largest metropolitan markets, 98 of them reported home price declines in September, while 15 markets reported home prices falling by more than 10% from their highs set earlier this year.

So what does this mean? According to Knock, a confluence of events that led to the report’s findings have pushed the market into buyer-friendly territory, good news for those who haven’t been sidelined by affordability costs.

In fact, only two housing markets (Providence, Rhode Island, and Salisbury, Maryland) have posted strong numbers, remaining at or above highs seen earlier this year.

According to Knock, in 15 markets, prices dropped by 10% and prices in 42 markets are projected to fall further from their 2022 records by September 2023. The total number of buyers' markets increased to 16, more than double from August. This is expected to grow to 27 by September 2023.

As the cost of everything goes up, be it due to inflation or supply chain problems, only 1.8 million homes were bought and sold across the top 100 tracked markets, less than same period in each of the last four years.

Inventory numbers, which seem to have bottomed out in 2021, have only increased in 2022 as the median days on the market is up to 20 in September, up by seven days from a year ago.

"Based on our findings, the shift to a more balanced market is still in its early stages. We expect that this much-needed reset will persist through much of 2023, and although prices will again begin to rebound they likely won't return to their peaks for the foreseeable future," said Sean Black, Knock Co-Founder and CEO. "While many drivers of the housing market like demographics and record low unemployment have not changed, the combination of higher rates and home prices have put affordability at the worst levels in 30 years with entry-level monthly payments set to be 34% higher in 2022 vs 2021.”

“The good news is that as prices soften and rates stabilize once the Fed is done with its aggressive rate hike campaign, hopefully after its meeting in November, buyers will be ready to re-enter the market and sellers will retain the majority of the equity gains they've seen in the last two years."

On a nationwide basis, the median home price was up 6.6% to $388,000 year-over-year in September, but down 5.4% from its peak of $410,000 in May. Although seasonality plays a factor in home prices, the rate at which prices are appreciating is well below the double-digit growth seen over the past two years.