Home / Daily Dose / What Caused the Slowdown in Existing-Home Sales?

What Caused the Slowdown in Existing-Home Sales?

The National Association of Realtors (NAR) reported on Tuesday that existing-home sales dropped off in November to an annual rate of about 4.76 million, the slowest pace in 19 months.

November’s decline represented a 10.5 percent drop from October’s downwardly revised total of 5.32 million, and the sales pace for November was the lowest since it was reported at 4.75 million in April 2014. November’s pace is now 3.8 percent lower than November 2014, marking the first time the existing-home annual sales pace declined year-over-year since September 2014.

One of the major drivers of November’s dropoff in the pace of existing-home sales is likely the implementation of the “Know Before You Owe” mortgage rule, commonly known as the TILA-RESPA Integrated Disclosure (TRID) rule, which went into effect on October 3. According to the Realtors Confidence Index in November, 47 percent of respondents said they were experiencing longer closing times compared to last year—up from 37 percent in October. NAR Chief Economist Lawrence Yun said the longer closing times caused by TRID may be delaying transactions until the following month, making the slowdown in existing-home sales for November temporary.

“It’s possible the longer timeframes pushed a latter portion of would-be November transactions into December,” says Yun. “As long as closing timeframes don’t rise even further, it's likely more sales will register to this month's total, and November's large dip will be more of an outlier.”

“Realtors worked hard to prepare for Know Before You Owe, and we knew there would be some near-term challenges as the industry continues to adapt,” said NAR President Tom Salomone, broker-owner of Real Estate II Inc. in Coral Springs, Florida. “Nonetheless, an early trend of longer lead times to closings is cause for concern. As Realtors report issues with their transactions, we will continue to work with the Consumer Financial Protection Bureau to ensure as little disruption as possible to the business of real estate.” 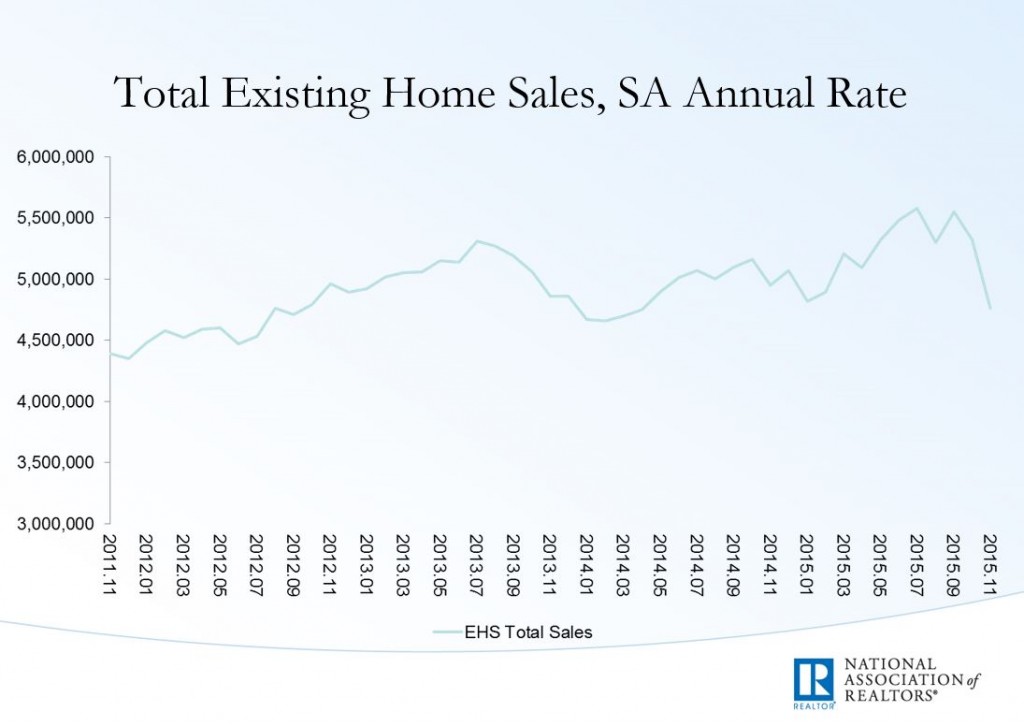 According to Auction.com EVP Rick Sharga, it was issues surrounding TRID and not changes in underlying housing fundamentals that caused the slowdown in existing-home sales.

“Nothing changed enough in the underlying fundamentals of the housing market to cause this kind of precipitous drop in sales,” Sharga said.  “The 3.8 percent year-over-year decrease in existing home sales is the first time that’s happened since September 2014. Cash purchases increased to 27 percent —more due to fewer buyers with loans than due to more cash buyers, but an indication that the dropoff wasn’t due to investors leaving the market. The most likely cause for the weak sales numbers is a delay in processing loans due to the new TRID mortgage requirements imposed by the CFPB. This is the biggest change in mortgage document processing in many years, and there have been numerous reports within the industry of problems implementing the process and the new documentation that comes with it. It’s very likely that if this is the main reason for the drop in sales, it will have an effect on existing home sales for the next few months, as lenders work through the backlog of delayed loans.”

Realtor.com Chief Economist Jonathan Smoke stated, “The abrupt change in the pace of sales is out of sync with demand indicators on Realtor.com and point to other likely factors causing a unique short-term disruption to closings, which the sales data represent. The good news is that we should see the closing disruptions dissipate over December and January as the delayed closings turn into an increase in sales for subsequent months.”

“The good news is that we should see the closing disruptions dissipate over December and January as the delayed closings turn into an increase in sales for subsequent months.”

TRID wasn’t the only factor driving November’s slowdown, however. Inventory remains an issue, declining by 3.3 percent to 2.04 million existing homes for sale—1.9 percent lower than in November 2014. The current unsold inventory is at a 5.1-month supply at the current pace of sales, which is an increase from October’s 4.8-month supply. Meanwhile, the median existing-home price rose by 6.3 percent year-over-year in November up to $207,200, marking the 45th consecutive month the median existing-home price has risen over-the-year.

“Sparse inventory and affordability issues continue to impede a large pool of buyers' ability to buy, which is holding back sales,” Yun said. “However, signed contracts have remained mostly steady in recent months, and properties sold faster in November. Therefore it's highly possible the stark sales decline wasn't because of sudden, withering demand.”