Double Dip in Home Prices Threatens One in Five Markets

Despite what seemed to be a flattening Ã¢â‚¬" and in some cases even a reversal Ã¢â‚¬" of home price declines last year, there are signs that the dreaded ""double dip"" is developing in as many as one in five markets, according to ""data released Wednesday by Zillow"":http://www.zillow.com/local-info.

While residential values in some markets appear to have found their bottom, Zillow has observed that prices in 29 of the 143 markets is tracks have leveled off or begun to decrease again after showing at least five consecutive monthly increases Ã¢â‚¬" early signs of what could become a second prolonged period of declines, the company warned.

""We have seen strong stabilization in home values during 2009, [but] there are clear signs that they will turn more negative in the near-term,"" said Stan Humphries, Zillow's chief economist. ""What we saw in mid-2009 was a brief respite from a larger market correction that has not yet run its course.""

According to Zillow, the largest markets most at risk to see a double dip in prices include the metro areas of Boston, Atlanta, and San Diego.

Humphries said, ""The good news is that, for those markets that will see a double dip in home values before reaching a definitive bottom, this second dip will not be a return to the magnitude of depreciation seen earlier, but rather will look more like a modest aftershock of the earlier downturn.""

An additional 29 markets, including the Los Angeles and New York metros, increased on a month-over-month basis each month throughout the fourth quarter, but Zillow says the rate of increase slowed from November to December, and several appear likely to experience months of sustained declines in early 2010.

Nationally, Zillow reported that home values in Q4 of last year fell 5 percent year-over-year, and 0.5 percent quarter-over-quarter, putting the media price for a single-family residence in the United States at $186,200. It marked the 12th consecutive quarter of year-over-year declines in Zillow's study and indicates that the fledgling recovery of home values is slowing again, the company said.

Falling home prices have left an unsettling number of borrowers underwater. Zillow reported that while negative equity remains high, the percentage of homes with outstanding mortgage balances higher than the value of the property was essentially flat from the third to the fourth quarter. The underwater number rose only slightly from 21 percent in Q3 to 21.4 percent in Q4. This comes after a decrease in negative equity from the second quarter's 23 percent.

Additionally, Zillow reported that 28.5 percent of home sales nationwide last quarter sold for less than what the seller originally paid.

According to Zillow's analysis, the number of homeowners losing their homes to foreclosure across the country reached a peak in December, with more than one in every thousand homes being foreclosed Ã¢â‚¬" a number not reached since Zillow began recording national foreclosure data in 2000.

At the same time, the company reported that foreclosure resales remained high, making up more than 20 percent of all U.S. home sales in December. Such transactions were especially elevated in the hotspots of Merced, California, where foreclosures made up 68.3 percent of sales; Las Vegas, with 64 percent, and the Modesto, California metro, at 62 percent.

""The remaining correction in home values we'll see in the first half of this year is a function of market fundamentals, such as the increasing flow of foreclosures, high levels of inventory in the market, and a probable decrease in demand,"" said Humphries.

With prices expected to decline further in most markets, Zillow expects to see a national bottom in home values by the middle of this year, with ""real appreciation remaining negligible"" for some time after. 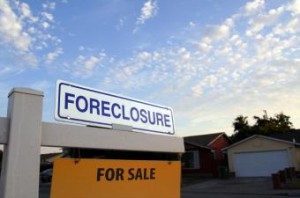 In the month of May, one in every 12,700 housing units had a foreclosure filing, a total down from April, but up 23% over last year at the outset of the foreclosure moratorium and CARES Act.