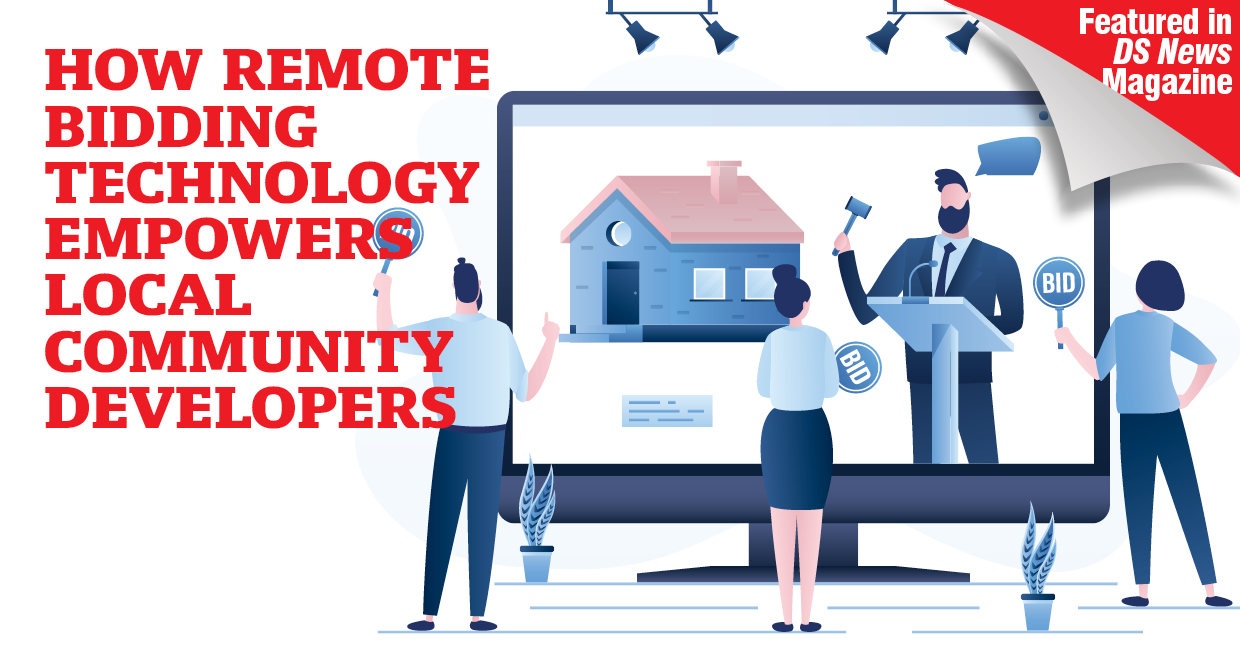 As more properties gradually make it to foreclosure in 2022, remote bidding technology will help ensure that more of these distressed properties are sold to local community developers who will responsibly rehab the homes and convert them into quality, affordably priced housing—primarily for owner-occupants.

“Being here and helping to enhance communities is just beyond fulfilling because real estate was something that my dad was passionate about,” said Sue McCormick, an Auction.com buyer who purchased three foreclosure properties in 2021 in her hometown of Dayton, Ohio. “I’m happy to say all of our home sales for our rehabs have been sold to owner-occupants.”

McCormick does not fit the stereotype many have of foreclosure buyers: Wall Street-backed institutional investors snatching up thousands of properties across the country each year to grow a single-family rental empire. In almost complete contrast to that stereotype, McCormick started buying in 2020 and has been able to purchase, rehab, and resell a handful of distressed properties—all in and around the neighborhoods where she grew up in Dayton—even while holding down a full-time, nine-to-five job.

Like McCormick, these local community developers sell most of their renovated foreclosure resales to owner-occupants: 68% among resellers who sold 10 or fewer renovated foreclosures in 2020 and 2021 combined, according to an analysis of subsequent sales post-foreclosure sale using public record and Multiple Listing Service (MLS) data.

Renovations by these local community developers helped recover the full market value of the homes, which resold for an average of 104% of their estimated after-repair value. That after-repair value was based on an Automated Valuation Model from ATTOM Data Solutions.

“I have found myself competing against bigger investors at times and it can be frustrating because I know they have deep pockets,” she said, noting that remote bidding technology is helping her to compete with those larger investors. “I use Remote Bid (on the Auction.com mobile app) 75% of the time because I travel for work so a lot of times I’m away from my laptop, I’m away from home. I could be on the road."

“I just like the process in general,” she added. “I don’t have to be in a crowded room of people. I love that idea, especially now during the pandemic.”

This technology is available in nearly 900 counties through the Remote Bid feature on the Auction.com mobile app. Prospective buyers can track, bid, and buy at live foreclosure auctions from anywhere their mobile phone has data coverage.

Leveling the Playing Field for Local Buyers
An analysis of Remote Bids placed and won in 2021 shows that the technology is helping to level the playing field for local, small-volume buyers. With the ability to remotely bid, these local community developers are better equipped to compete and beat out large institutional buyers whose capital and resources have historically given them the upper hand at in-person foreclosure auctions.

“Chattanooga has just been flooded with investors from California and other places … there’s not property that you can buy and afford there,” said Steve Johnson, a Chattanooga, Tennessee-based Auction.com buyer who purchased two properties across the state line in Georgia using Remote Bid in 2021.

The analysis shows that remote bidding technology is helping local community developer buyers like Johnson expand their buying radius. In 2021, the median distance between Remote Bidders and properties bid on was 39 miles, compared to a median of 16 miles for bidders at the in-person auctions. 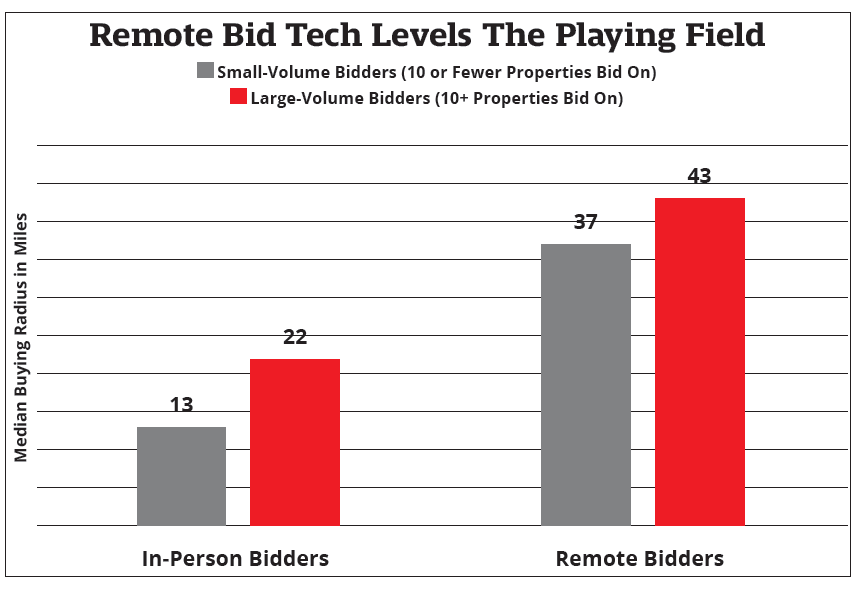 A higher percentage of bidders using Remote Bid were out-of-state—21% compared to 10% for in-person bidders. But many of those bidders are like Johnson, leveraging the technology to bid on properties that may be across the state line but are still within driving distance.

Both properties Johnson purchased in 2021 via Remote Bid were within driving distance from his home, and he drove to both regularly to perform renovations after purchasing. Remote Bid has gained the most traction in the states of Georgia and Texas, where all foreclosure auctions statewide are held on the first Tuesday of each month. Those “Super Tuesday” auctions traditionally hampered the bidding from resource-constrained buyers like Johnson.

“You don’t have to go sit around at the courthouse,” said Johnson, describing the experience of purchasing the two properties via Remote Bid. He purchased both homes at the March Super Tuesday foreclosure auction in Georgia even though they were in two different counties with live foreclosure auctions taking place simultaneously. “There were a host of auctions going on in Warner Robins that day. … I went ahead and placed a Remote Bid for the property in Warner Robins and then also placed a Remote Bid on the Wadley (property).”

Previous: Bankruptcies Jump by 34% in March
Next: Getting Borrowers Back on the Road to Recovery