Analysts warn that the practice of rubber-stamping foreclosures without following legal statutes may go far beyond these three, with more foreclosure suspensions expected in the coming weeks. These paperwork problems are widely expected to draw out the already devastating foreclosure crisis in the affected states.

At the request of a number of DSNews.com readers, we have dug a little deeper to provide a list of the states where judicial foreclosures are the standard and that are most likely impacted by the foreclosure suspensions announced.

According to data provided by ""RealtyTrac"":http://www.realtytrac.com, the 23 states listed below primarily use the judicial foreclosure process, with two additional states (Hawaii and Nebraska) employing judicial procedures ""fairly often.""

A spokesperson for RealtyTrac explained that all states allow for foreclosures to be handled through their judicial system, but the 23 listed here are the ones where it is most commonly used.

According to a ""_Mortgage News Daily_ blog"":http://www.mortgagenewsdaily.com/channels/pipelinepress/09212010-mortgage-housing-starts.aspx, the memo GMAC sent to its ""preferred agents"" alerting them of its foreclosure suspension includes all of the states listed above with the exclusion of Delaware, Maryland, and Massachusetts. In their place, Hawaii, North Carolina, and Nebraska were added to GMAC's list.

Bank of America has provided DSNews.com with its list of affected states. It contains all the states cited by RealtyTrac above, with the omission of Maryland and Massachusetts and the addition of Hawaii and Nebraska.

A spokesperson for JPMorgan responded to our inquiry with ""We aren't sharing at this point.""

The analysts at the credit rating agency ""DBRS"":http://www.dbrs.com wrote in commentary released Monday, ""Apparently, in an effort to keep up with the ever increasing volume of foreclosures, many servicers are now realizing they violated the foreclosure commencement requirements of judicial jurisdictions which necessitate that: 1.) anyone who signs an affidavit must have verified all of the information contained within the document to ensure its accuracy and; 2.) all affidavits must be executed in the presence of a notary.

The analysts added, ""DBRS believes that servicers will be able to quickly correct and refile any deficient affidavits in addition to implementing the appropriate controls to ensure there is not another breakdown in process. However, RMBS [residential mortgage-backed securities] that contain these loans will likely experience higher loss severities due to longer liquidation timelines.""

The ""Association of Mortgage Investors"":http://www.the-ami.org/2010/10/01/ami-press-release-ami-calls-on-rmbs-trustees-to-step-up/ issued a called to all RMBS trustees on Friday urging them to ""perform their fiduciary responsibilities and protect millions of American pensioners and retirees, in the wake of reports about serious irregularities in the processing of legal affidavits by the nation's largest mortgage servicers.""

The group says the news that has come to light ""undermines the integrity and the operational framework of the housing finance and mortgage system as it exists today.""

In all cases where underlying loan files do not have the legal documents required under RMBS pooling and servicing agreements (PSAs), the Association of Mortgage Investors is demanding servicers immediately pursue the repurchase of these loans. 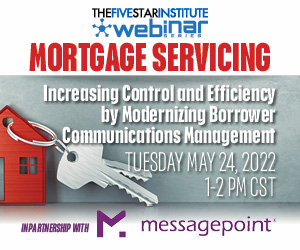