""Colonial Savings F.A."":http://www.colonialsavings.com, headquartered in Fort Worth, Texas, says government initiatives to lower interest rates and provide incentives to first-time buyers have led to a lending boom for the bank's mortgage divisions.
Colonial National Mortgage, the company's retail origination channel, and CU Members Mortgage, the company's credit union mortgage division, report a combined increase of 83.45 percent in the number of closed loans from January through May of 2009, compared to the same period in 2008. A total of 7,217 loans were closed in the first five months of 2009 for $1.2 billion.
While 77 percent of new mortgages took the form of refinances to lock in more affordable mortgage payments, the bank said government programs are also stimulating new home purchases, especially for first-time buyers. The $8,000 federal tax credit, combined with record low rates and an abundance of houses for sale in the market, has prompted many to take advantage of homeownership for the first time, the bank explained.
According to David Motley, president of Colonial Savings, both homebuyers and those refinancing existing home loans realize that this is a advantageous time in the market. ""For many, low rates and incentives make ownership possible for the first time or allow them to move up to a larger home, and that is good for our country's economic recovery,"" Motley said. ""Likewise, those who are refinancing to a lower interest rate on their existing home loans typically lower their monthly payments, and that frees up cash for other needs.""
Motley added that the lack of a secondary market for subprime mortgages and other exotic loan programs has had very little affect on Colonial Savings' mortgage business. ""We're a conservative lender that sticks to our strength, which is putting and keeping people in homes they can afford. And because we retain servicing on 98 percent of the loans we make -- collecting payments and managing escrow accounts -- we have long-term relationships with our customers.""
Motley continued, ""These days, it's vitally important for homebuyers to know their lender is operating with integrity and is not just out to make a short-term profit. We are proud of the fact that we have been able to fund this increase in business with our own capital and have not needed to ask the government for TARP or other 'bailout' money.""
Founded in 1952, ""Colonial Savings F.A."":http://www.colonialsavings.com/ is a national, multi-service financial institution and is one of the largest servicers of mortgage loans in the United States, with a portfolio exceeding $12.5 billion. 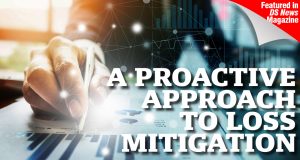 A Proactive Approach to Loss Mitigation

FEMA says funds will be used for more than 50 projects to help reduce the “damage-rebuild-damage” cycle.