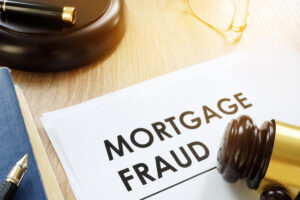 Some of the decline in the Index is attributed to recalibration of the company’s updated scoring model, which was released late Q1. However, increasing risk levels were recorded during Q2 when analyzing monthly data.

The Mortgage Fraud Risk Index is calculated from the aggregation of individual loan application fraud risk scores during the previous quarter. Score compilations are calculated for the 100 highest-populated Core-Based Statistical Areas (CBSA) in the nation, and the 15 CBSAs with the highest Fraud Risk for the most recent quarter are shown in rank order below. 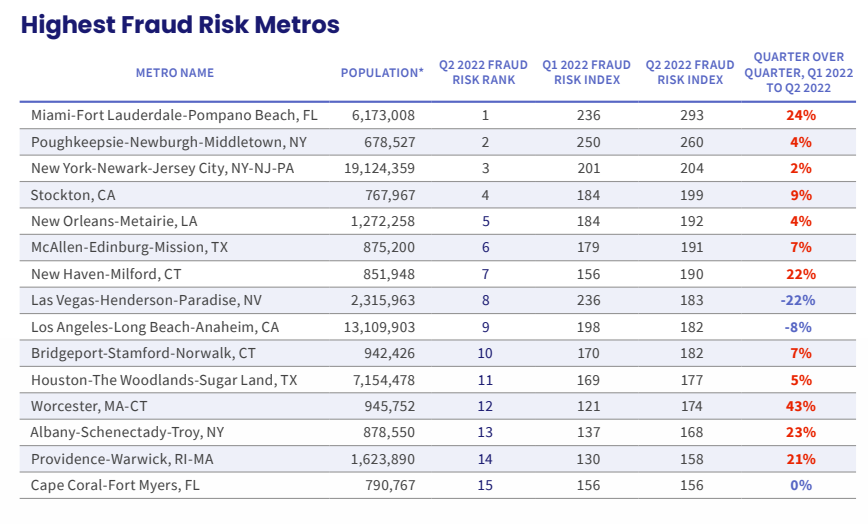 The second quarter showed a transition to purchase transactions, as the majority of mortgage application activity, up from 53% in Q1 to 71% in Q2. Application volume continued to decline in Q2, but not as dramatically as it did in the two previous quarters.

The rise is rates is making it more difficult for prospective buyers to procure a mortgage loan, as a wildly-fluctuating rate environment has seen rates dip below the 5%-mark and rise back again to 5.78% near the close of Q2 amid inflationary fears.

Actions by the Federal Reserve’s Federal Open Market Committee (FOMC) to curb inflation by raising the nominal interest rate by 75 basis points from a range of 1.50-1.75% to a current rate of 2.25-2.50% in late July was another move with repercussions to bring balance back to the housing market. The Fed’s actions in late July marked the fourth such increase in 2022, and the biggest consecutive rate hike on record, as, to date, the FOMC raised rates in March (+25 points), May (+50 points), and June (+75 points).

“Fraudsters thrive in uncertain market conditions, where their activities are harder to detect and separate from legitimate investors who are also attracted to variable markets,” said Ann Regan, Executive, Product Management for CoreLogic. “Nevada’s economy took a big hit with COVID-induced shuttering of gambling/tourist activities and this is driving a decline in home prices, as well as an increase in fraud risk. With many economists predicting a recession later this year or early next year, we can expect to see market variability in other regions and likely an increase in fraud as well.”

As more and more now have the ability to work remotely, some are flocking to coastal areas of high mortgage fraud incidence such as Miami, Florida, while others seek the space and solitude of the upstate New York regions of Poughkeepsie-Newburgh-Middletown, New York, both areas ranking one and two respectively in terms of mortgage fraud by CoreLogic.

In fact, a recent Redfin analysis found that real estate investors bought 87,500 U.S. homes in Q2 of 2022, up 11% quarter-over-quarter and 5.9% year-over-year. Q2’s totals are down from the all-time high of 93,700 recorded in Q3 of 2021, a time that many considered the height of the pandemic-driven homebuying frenzy.