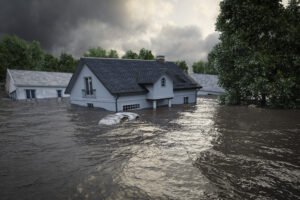 Zillow, in partnership with ClimateCheck, has issued a new analysis that finds that areas with increased flood risk have also experienced an increase in mortgage denials and in would-be borrowers withdrawing their mortgage applications, even after controlling for income and property value.

The risks associated with the effects of climate change have been central to conversations surrounding the future of housing in recent years, and this new evidence suggests that while climate risks may not have dented demand for housing, those risks may be taking more of an active role in the decision-making of buyers and lenders.

ClimateCheck empowers property buyers, owners, and brokers by exposing and quantifying the risks related to the climate crisis through proprietary risk assessments and reports.

According to the report, the rate of both denials and withdrawals in areas of high flood risk are higher than in 2017, and also higher than in areas at risk of other climate events. But homes in areas with higher flood risk continue to appreciate faster than in other areas, showing there are still plenty of buyers willing to accept risk—and pay the high cost of a home and necessary insurance—for the tradeoff of living in a desirable waterside location.

"The higher rates of mortgage application denials and withdrawals in high-flood-risk areas are an encouraging signal that buyers and lenders are more often including flood risk in their decision-making," said Zillow Senior Economist Nicole Bachaud. "Living around desirable coasts and other bodies of water, which tend to be more flood-prone areas, will continue to be a draw for home buyers, but more and more are considering the additional risk. We have not yet seen other types of climate risk make a dent in home-buying practices, so there is a lot of room left for change and continued education."

Zillow found that home buyers prefer to purchase investment homes in these high-flood-risk areas rather than primary residences. As the share of buildings at risk for flooding increases in a given census tract, the share of mortgage applications for investment properties also increases. This could signal that homeowners are less willing to stake their primary residence in higher-risk areas than those purchasing a part-time or investment home. Or it could indicate that households with multiple properties—households that are likely to earn a higher income—are better able to afford homes in these quickly appreciating areas.

Redfin recently reported that sales of luxury U.S. homes and investment properties fell 28.1% year-over-year during the three months ending Aug. 31, 2022, marking the steepest decline in a three-month-span recorded by Redfin in over a decade, eclipsing the reading of a 23.2% plunge that occurred at the outset of the pandemic.

The Zillow/ClimateCheck report also found that the data regarding lending in areas with high risk of a flood is showing an increasing effect, risks associated with other climate events, including fire, drought, heat, and storms, are having little to no effect on mortgage lending. Census tracts with higher risk of these climate events have experienced no significant differences in the share of mortgages that are denied or withdrawn compared to places with less risk.

Click here to view the full report from Zillow/ClimateCheck.