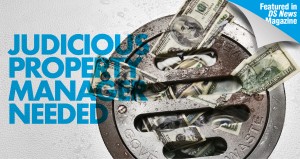 Amid budget cuts and promises to eliminate waste, the government is bleeding billions to maintain and secure vacant, underutilized federally owned properties.

For Sale: Commercial building, 375,000 sq. ft., just blocks from the White House, one previous owner. It reads like an ad for premier office space in a prime location, but the property isn’t for sale. It’s an old, abandoned U.S. Post Office and annex, and one of more than 14,000 empty, underused federal buildings draining taxpayer money from the Treasury and from local communities.

According to congressional estimates, the government’s mismanagement of the old D.C. Post Office alone has cost taxpayers $6.5 million a year for more than a decade that it’s been sitting vacant and underutilized. To maintain and secure its 14,000-plus underperforming assets, the federal government expends an estimated $1.6 billion a year in taxpayer funds.

The Office of Management and Budget (OMB) has concluded consolidating the footprint of federal buildings and facilities, and selling or redeveloping high-value, but underutilized assets would generate $15 billion in revenue—and that’s on top of the billions in future cost savings from trimming the government’s property holdings. That doesn’t count the additional revenue local municipalities could bring in if the properties were in private hands since government properties aren’t subject to local area property taxes.

“In order to see the robust economic recovery we all want, we need to deal effectively with the large volume of vacant and distressed properties throughout the country,” Federal Reserve Governor Elizabeth A. Duke told a group at the Federal Reserve Bank of New York in a speech on supporting neighborhood stabilization last October.

Mortgage lenders, servicers, investors, and other default servicing practitioners across the country have faced increasing pressure from government agencies at all levels pushing for the maintenance and disposal of vacant, foreclosed homes in a manner that is least disruptive to local communities. And per regulators, banks and other private holders of consumer debt are subject to strict accounting rules for the recordation of nonperforming assets and capital write-offs.

Imagine if a bank were to hold on to money-depleting assets like the government is doing. Their shareholders and investors would be asking questions, and rightfully so. Yet taxpayers—somewhat similar to a corporate shareholder—are expected to sit idly by and watch their money squandered right in front of them, yet the government continues to engage in the same wasteful behavior year after year after year.

The General Services Administration (GSA) acts as the federal government’s “landlord,” procuring and managing space to meet the needs of other federal agencies. GSA is one of nine federal agencies that, collectively, own or manage 93 percent of federal real property. Federal data and analysis indicates GSA mismanages one of the government’s largest portfolios of real property.

In recent years, GSA has increasingly relied upon leasing to satisfy long-term needs of federal agencies, despite its existing inventory of government-owned properties not being used and already draining government resources. As of 2010, GSA leased more space than it owned, yet according to GSA’s 2009 State of the Portfolio Report, nearly 40 percent of its assets were underperforming at that time, sitting empty, underused, and deteriorating.

GSA’s commissioner of public buildings service, Robert A. Peck, testified in 2010 that the average age of GSA’s real property inventory was 46 years and nearly a third of the assets were older than the agency itself.

Despite the significance of government waste from this matter and the sizeable revenue and savings that could be realized, the property-surplus story is not very widely known to the general public. One man who has made it his personal crusade to spread the news and encourage others to demand action from their elected officials is Douglas Dennison, national sales coordinator for Rowell Auctions, Inc., in Florida.

Dennison says he first became aware of the glut of vacant and abandoned government properties when President Obama gave his State of the Union address in January 2011. “He talked about saving money by selling government surplus properties,” Dennison said. “The next month in his State of the Budget address in Baltimore, Maryland, he indicated there were 14,000 properties that we could sell to save billions for the taxpayers.”

With such large numbers at stake, in terms of both properties and tax dollars, Dennison was confounded. “If we could get the government to sell these properties, not only would it generate revenue that could help offset the federal deficit and save money by eliminating the holding costs footed by American taxpayers,” Dennison said, “but the private sector buyers would be contributing to economic growth by hiring staff for the facility, stocking it with goods and services, paying property taxes, and all this positive activity would help elevate local market values and local economies, and the benefits would go on and on.”

Dennison and his employer, Tommy Rowell, CEO of Rowell Auctions, started out on a mission. With the slow-moving wheels of progress in Washington, they knew it would be a long process before any resolution came of the government’s surplus of property holdings, but they’ve carried on, unwavering and impassioned for two years now.

“We knew we should try to make a difference,” Dennison said. “Yes, we were to some extent motivated by the potential opportunity to be chosen as the auction house to sell the properties, but even more importantly, as American citizens and as taxpayers, we have the right to demand our elected officials clean this up and become better stewards of our money.”

Dennison and Rowell made seven trips to Washington, D.C., spent hours on the phone, and shot off countless emails to draw attention to the government’s costly stockpile of empty buildings and outdated operational facilities, with hopes of ultimately inciting action from lawmakers. “The general public doesn’t know about these issues,” Dennison said.

Over the past two years, Dennison and Rowell have met one-on-one with four representatives and a senator. They’ve sat with staff from the Senate Budget Committee and the Senate Homeland Security and Governmental Affairs Committee, and they’ve met with the General Accounting Office, the Congressional Budget Office (CBO), and GSA.

At the same time, these same policymakers have been holed up on Capitol Hill drafting budget proposals, crossing line items off the government’s expense ledger, and performing cost analysis of various strategies, all to try and get a handle on the nation’s $16 trillion debt with little notice paid to the billions of dollars being sent out the door to maintain empty and abandoned properties the government doesn’t plan to repurpose.

The Republican members of the House Committee on Transportation and Infrastructure, led by committee ranking member John L. Mica (R-Florida), put out a report in October 2010 titled “Sitting on Our Assets: The Federal Government’s Misuse of Taxpayer-Owned Assets.”

“Particularly when facing difficult financial challenges in our nation, it is vital that Congress focus its attention on saving our limited taxpayer resources and wisely using federal assets,” the report stated.

The committee members’ report cites a statement from Congressional Research Services, saying, “Disposition is an important asset management function because the costs of maintaining unneeded properties can be substantial, consuming billions of dollars that might be applied to pressing real property needs, such as acquiring new space and repairing existing facilities, or to other policy issues, such as reducing the national debt.”

Last year, Rep. Jeff Denham (R-California), chairman of the House Economic Development, Public Buildings, and Emergency Management Subcommittee, introduced the Civilian Property Realignment Act (CPRA), H.R. 1734. The bill, which establishes a commission to review federal properties and make recommendations for reducing waste, increasing efficiency, and saving taxpayers’ money, passed the House of Representatives by a wide margin but never made it past committee in the Senate. Rep. Denham has reintroduced his bill in the 113th Congress.

Just last month, the House Oversight and Government Reform Committee passed the Excess Federal Building and Property Disposal Act, H.R. 328, sponsored by Rep. Jason Chaffetz (R-Utah). H.R. 328 would create a pilot program managed by the OMB and GSA to dispose of unneeded federal properties through public auctions, with 100 percent of the net proceeds returned to Treasury for debt reduction. The bill also aims to increase transparency, remove red tape, and raise the level of accountability among federal agencies with the creation of an online database of all property owned by the government.

According to the report authored by Rep. Mica and his colleagues on the Transportation and Infrastructure Committee, there are a number of reasons why federal agencies may be sluggish in their disposition of unneeded assets.

Legal and regulatory requirements may serve as a hindrance to disposition in some instances. As an example, the report points out federal agencies are required to pay for corrective actions to address environmental, repair, and maintenance issues prior to disposal. In addition, a structure must be screened for any other public uses or benefits before it can be cleared for sale as a “surplus” property.

Disposing of unneeded property not only has the potential of producing proceeds for the federal government, but it also saves funds by avoiding future operating costs of maintaining and securing the unneeded asset, according to Rep. Mica.

“To the credit of the GSA,” Dennison noted, “they are now working out a deal to lease out the old D.C. Post Office and have begun to explore disposition strategies for several properties where Rep. Denham and other subcommittee members held field hearings last year.”

Long, who is a former real estate broker and auctioneer himself, added that it’s important “to have local real estate agents and local auction firms involved in the process … to get the highest dollar possible” from the sales of these properties.

Rowell says the government and its selling agent should also weigh the pros and cons of bulk sales versus individual property transactions to ensure the assets yield the highest purchase price. “We are hoping these properties will not be sold in bulk,” he said. “Bulk purchases are fast but rarely achieve top market dollar. Additionally, they eliminate the nearby property owner who may be interested in the abandoned asset for purposes that would benefit the local community.”

Citing the extreme costs associated with poor asset management given the size of federal real estate holdings and referencing “excess and underutilized property” and “deteriorating and aging facilities,” in 2003, the Government Accountability Office (GAO) placed real property management on its list of “high risk” government activities. GAO said at the time that the government’s asset management “reflects an infrastructure based on the business model and technological environment of the 1950s.” Real property management remains on the list of “high-risk” government activities still today, more than 10 years later.