The Federal Reserve announced Wednesday that it intends to take a slow approach to raising interest rates in the coming year, even as the economy continues to strengthen. Given the current climate, the committee hinted that it will take steps to raise short-term interest rates in 2015, though it still would not commit to a timeframe, saying only that "it will likely be appropriate to maintain ... the [current] federal funds rate for a considerable period of time."

END_OF_DOCUMENT_TOKEN_TO_BE_REPLACED 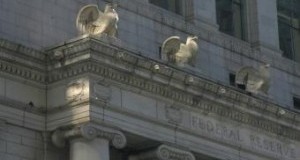 The Board of Governors of the Federal Reserve System issued their Federal Open Market Committee statement, commenting that growth in economic activity has picked up recently despite a sluggish first quarter, due in part to adverse weather conditions. The Fed noted that recovery in the housing sector remained slow.