The Future of Auction Sales 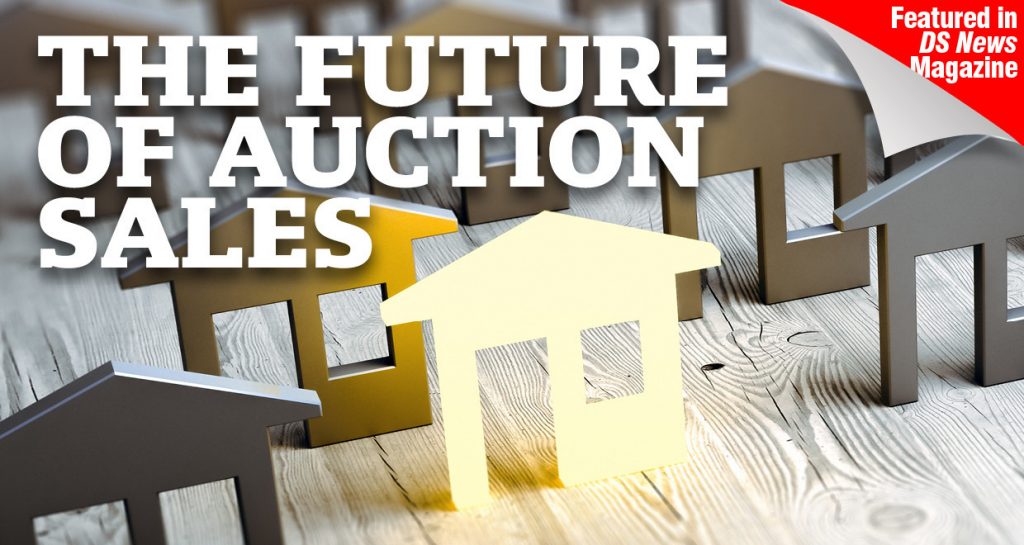 Editor’s note: This feature originally appeared in the April issue of DS News

In fact, proprietary data from Auction.com shows that buyer demand in the distressed market has actually increased in the first quarter of 2020 compared to a year ago.

More than 40% of all properties brought to foreclosure auction via the Auction.com platform in January were sold to third-party buyers—typically local real estate investors. That foreclosure sales rate jumped 21% from a year ago to a 29-month high. Preliminary data from February and the first half of March show the foreclosure sales rate on track to continue its year-over-year increases in those months as well.

But the slowdown in foreclosure sales in Q2 2020 will be more about a temporary slowdown in supply rather than a dampening of demand for distressed properties. That’s evident in website traffic and bidding for online auctions of bank-owned (REO) properties on the Auction.com platform.

Website traffic to online REO auction properties accounted for more than 50% of all traffic to individual property pages on Auction.com on March 18—the first time above 50% so far this year. This indicates buyers are shifting to online auctions to acquire distressed properties as inventory at in-person foreclosure auctions dries up—not to mention the added convenience and health benefits buyers get from buying online.

“With what we’re seeing now with the coronavirus, which will go away at some point, it makes sense to stay at home,” said a Portland, Oregon-based buyer who buys online REO auction properties remotely in Albuquerque and Las Vegas.

The shift toward remote buying of distressed properties means that REO homes available via online auction are attracting more competitive bids. So far in the first quarter, through the middle of March, 89% of online REO auction properties sold on the Auction.com platform have received bids from multiple, competing bidders, up from the previous quarter and a year ago to the highest level as far back as data is available, Q3 2017.

Innovation such as the online auction—not widely used in the retail housing market—is enabling remote buying in the distressed marketplace, and thereby helping to bolster demand even in a season of social distancing. But in addition to technology that enables remote buying—more on that shortly—distressed market demand is also benefiting from the countercyclical propensity of many real estate investors who want to “buy the dip.”

“I’ve been preparing for that,” said Denver-based real estate investor Bijan Green. He said he purchased 25 properties in 2019, primarily via online REO auction, and has been saving up cash to buy even more in 2020. “Everybody who is a real investor is waiting around to see ‘When can I buy again?’. Some of the guys that have been in the game for 30 or 40 years that have been dormant, they will start to come in to buy.”

The countercyclical propensity of real estate investors was evident during the Great Recession of 2008. Although buyers at foreclosure auction began pulling back on their purchases before the recession hit, the sales rate at foreclosure auction began skyrocketing in late 2008—even while retail home prices continued to drop by double-digit percentages.

By the end of 2009, the national foreclosure auction sales rate reached 20.3%, not far below its 22.2% pre-crash peak in Q3 2004. Meanwhile, national median home prices continued their descent for another two years before bottoming out in the first quarter of 2012.

During this uncertain time in the retail real estate market, high-volume investors like Tampa-based Lee Kearney were on a buying spree at the foreclosure auction in anticipation of a market recovery. It’s a strategy Kearney plans to employ again in another downturn.

“I’m going to go into extreme buying mode when defaults increase and everybody hates real estate,” said Kearney, CEO of Spin Companies, a group of real estate investing businesses. “I believe the opportunity is going to be in the areas with high concentrations of FHA (Federal Housing Administration-backed loans) in the last two years.”

While online REO auctions have quickly become the darling of distressed property buyers given the specific challenges of the coronavirus crisis, new technology being unveiled somewhat serendipitously in the midst of the crisis will eventually expand the pool of distressed inventory available to buy remotely.

The process of building the remote bid program for foreclosure auctions began more than a year ago, long before the current health and market turbulence. It was built to provide buyers with even better access to more distressed inventory while also giving mortgage servicers an even more competitive marketplace in which to sell distressed inventory.

“We present proof of funds ahead of time as high as we’re going to bid and then we bid online,” said the Portland, Oregon investor. “That (will) net the sellers 20% more I think.”

Innovation like remote buying combined with a broad base of buyers—including many countercyclical buyers—has translated into the distressed marketplace consistently outperforming the retail marketplace in terms of price appreciation. The average price for foreclosure sales via the Auction.com platform in January was up 11.2% from a year ago—nearly twice the 6.5% rate of appreciation in the larger retail market, according to an analysis of average sales prices in Multiple Listing Service (MLS) data.

Distressed properties are inherently destabilizing to a neighborhood because they typically are properties with deferred maintenance and unpaid property taxes. This creates a drag on surrounding home values and lowers revenue for local government services. The more efficiently a distressed property can be rehabbed to full retail value and returned to a new homeowner or tenant, the more stabilizing effect it has on the surrounding neighborhood.

The vast majority of real estate investors buying distressed properties are quickly and responsibility rehabbing the homes and getting them into the hands of owner-occupants within a year, according to an Auction.com analysis of more than 164,000 properties brought to foreclosure auction in 2018 and 2019.

Among properties that sold to third-party buyers at the auction and then subsequently resold, 69% were owner-occupied within a year. Additionally those properties gained an average 23 percentage points in value between the foreclosure auction and the resale, based on an analysis of sales price to a full “after repair” automated valuation model.

Most investors are also responsibly rehabbing the roughly 30% of homes that are purchased at foreclosure auction and then held as rentals. According to the Auction.com survey, 45% of buyers who hold properties as rentals said they budget at least 20% of the purchase price for rehab costs, and an additional 36% said they budget 10 to 20%.

Lastly, during the national emergency precipitated by the coronavirus crisis, Auction.com is requiring all buyers on its platform to sign a pledge that they will refrain from commencing any evictions during the 60-day federally mandated moratorium on evictions.