Price Appreciation—Good for Driving Down Defaults 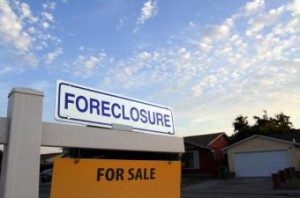 Home price appreciation has been steady every year since prices bottomed out in 2012. While some analysts may point out that this has hurt affordability, since wage growth has largely not kept up, at least one pointed out a positive result of rising prices.

“The 7 percent appreciation in home prices through November 2016 has added an average of $12,500 in home-equity wealth per homeowner across the U.S. during the last year,” said Anand Nallathambi, President and CEO of CoreLogic. “Sustained growth in home prices is clearly bolstering homeowners’ spending power and balance sheets and, as a result, spurring a continued drop in defaults.”

A continued drop in defaults meant that foreclosures in November dropped dramatically compared to a year prior, with 9,000 fewer completed foreclosures and overall foreclosure inventory down by 30 percent, according to the November 2016 National Foreclosure Report by CoreLogic.

At their peak in late 2010, there were nearly 119,000 completed foreclosures nationally per month. In November 2016, according to CoreLogic, there were 26,000, down from 35,000 the previous year. November’s national foreclosure inventory made up a little less than 1 percent of U.S. homes, approximately 325,000, compared to last November’s roughly 465,000.

Overall foreclosure inventory was down most in Washington, where year-over-year, the numbers dropped by 42 percent. 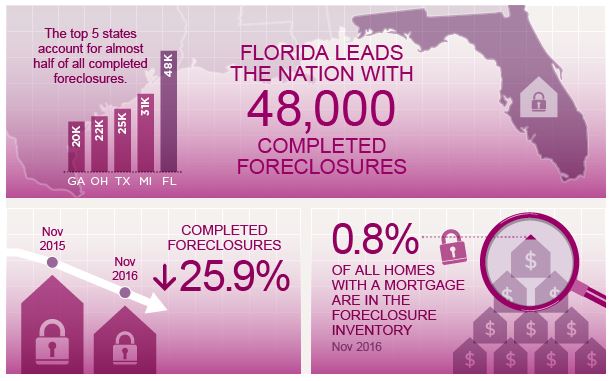 “The decline in serious delinquency has been substantial, but the default rate remains high in select markets,” said Frank Nothaft, Chief Economist for CoreLogic. “Serious delinquency rates were the highest in New Jersey and New York at 5.6 percent and 5 percent, respectively. Indiana, South Carolina, Hawaii, Connecticut, Oklahoma, Florida, Ohio, Kentucky, New Mexico, Delaware, Maine, and Pennsylvania all had serious delinquency rates higher than the national average (2.5 percent) in November, according to CoreLogic.