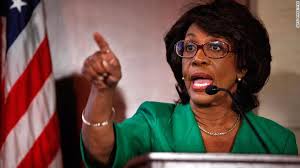 Maxine Waters, Chairwoman of the House Financial Services Committee is the first African-American, and the first woman, to wield the gavel of the chair. Waters is known for being a strong proponent for her constituents in a majority-minority Los Angeles district of below-average incomes. In her new House role, she will oversee Wall Street titans.

Even as she gets ready to take on Wall Street giants, in an interview with John Harwood of CNBC, Waters stated that she is “open to hearing from bankers.” While the Republican right disagrees with Waters on several grounds ideologically, they “credit her as a trustworthy colleague with a practical streak that can, at times, produce bipartisan cooperation,” CNBC stated.

Speaking of labels, she said, “I think you have to look at where it comes from. If it comes from people who are diametrically opposed to me and my philosophy, and what I care about and what I've worked on, then it is not credible, and so I pay no attention to that.” Addressing rumors about the Chairwoman’s efforts to put big banks out of business, she said, “No, it's not about putting anybody out of business. It's about asking the questions about your ability to understand your own bank.” Waters pointed out that the banking community assumes a significant place in the economy. Waters also spoke to Harwood about her perspective on HUD, the current corporate philosophy of financial institutions as well as her legislative agenda.

As reported in DS News earlier, in her first policy speech as Committee Chairwoman of the House Financial Services Committee, Waters addressed the need to bring in a renewed focus on housing affordability issues.

“I will soon be reintroducing my bill, the Ending Homelessness Act, which would help to ensure that every American has a safe, decent, and affordable place to call home. The bill provides $13.27 billion in new funding over five years to federal programs and initiatives to prevent homelessness,” Waters said. Holding Committee hearings on homelessness and important housing issues will also be a part of the plan to elevate housing issues into a national discussion, and present proactive solutions and remedies, she indicated.

She also advocated core principles as part of the legislative efforts to address the future of housing finance reform such as, maintaining access to the 30-year fixed rate mortgage; providing stability and liquidity to withstand future financial crisis; ensuring sufficient private capital to protect taxpayers, and a smooth transition to a new finance system. Waters has made it clear that her ongoing priority is ensuring a strong Consumer Financial Protection Bureau and, strong financial regulation that protects consumers, investors, and the economy.

Previous: Is the Balance of Power Swinging Back Toward Homebuyers?
Next: The Week Ahead: President Trump’s State of The Union