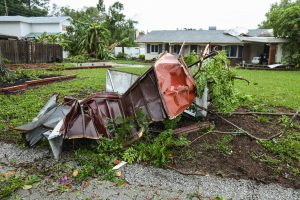 A staggering number of tornadoes in America over the past decade has resulted in billions of dollars in property damage, which could be especially nerve-wracking for certain homeowners during the spring, since April, May, and June typically see the most tornado activity countrywide.

The government outfit created to respond to natural disasters and aid victims, The Federal Emergency Management Agency (FEMA), has allotted $359,768,106 for tornado-related recovery during this time span, shows a report from LendingTree's Value Penguin. That goes toward the approximately $14.1 billion damage overall to property and crops caused by 5,710 tornadoes hitting every state except Alaska, including Washington, D.C. In each of Alabama, Texas, Mississippi, and Illinois, twisters wreaking more than $1 billion in damages.

But the frequency of hits did not necessarily dictate the distribution of funds.

FEMA's records show that just two states received nearly 50% of the agency's disaster relief funds during this period, with unlikely Massachusetts leading the way, according to the report.

The big takeaway for homeowners is this: Value Penguin data journalist Andrew Hurst says that "while the federal government's efforts to repair tornado damage pose a multibillion-dollar financial commitment, data from insurers don't indicate that affected property owners will face huge premium increases if a storm destroys their homes."

In the 13 states that are most prone to tornadoes, homeowners generally don't face punitive increases to their premiums after a catastrophic loss. Insurance rates increased by an average of 8% following a total loss, according to the report.

In other words, rate information shows an average per-year increase of only $180 in the states most likely to experience the greatest number of tornadoes.

He adds that, based on the findings, FEMA Funding is not an adequate system to rely upon in case of a natural disaster.

"If you are preparing for the upcoming Tornado season, double-check your home insurance coverage—and make sure your insurance will allow you to recover completely after a storm," Hurst advises.

"While most homeowners can be assured that their rates won’t rise precipitously after a tornado, if not adequately insured, [homeowners] may face hundreds of thousands of dollars of damage [they] may need to pay out of pocket."