Zillow conducted its first-ever mover report, which found that more than one in 10 Americans (11%) say they already moved in the past year, either by choice or by circumstance, contributing to the “Great Reshuffling,” and millions of additional households could enter the real estate market as a result of the COVID-19 pandemic.

Researchers from Zillow concluded that a significant number of homeowners say they're more likely to move and sell their home as a result of the pandemic, representing an additional 2.5 million households that could enter a tight real estate market already driven by unrelenting demand.

Life and financial uncertainty were listed as the top reasons that homeowners have not listed their home for sale during the pandemic among those polled. The COVID-19 vaccine is likely to change that and prompt many more people to move, as Zillow data found that 70% of homeowners said they would be comfortable moving to a new home when there is widespread vaccine distribution. Among recent movers, 75% said they moved for positive reasons, such as being closer to family or friends or living in an area they've always desired.

Sun Belt metros were the top destination for most moving, as Phoenix; Charlotte, N.C.; and Austin, Texas saw the highest net inbound moves in the first 11 months of 2020, citing affordability and warmer weather as keys. 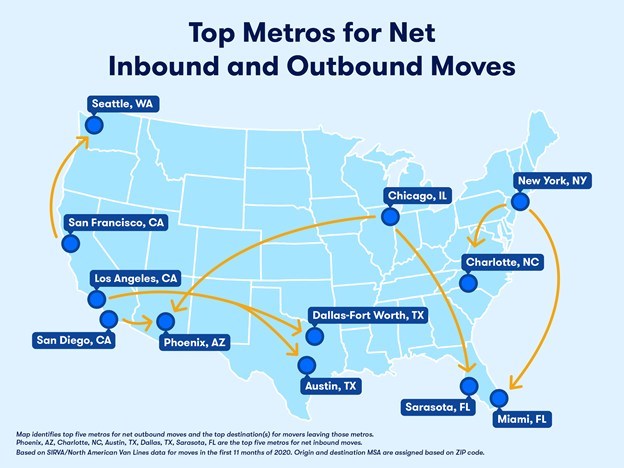 Data from North American Van Lines found some of the country's largest and most expensive housing markets, including New York, Los Angeles, San Francisco, and Chicago with the highest net outbound moves, as for-sale inventory in these metros climbed.

"The pandemic brought an acceleration of trends we were seeing in 2018 and 2019," says Zillow Senior Economist Jeff Tucker. "More affordable, medium-sized metro areas across the Sun Belt saw significantly more people coming than going, especially from more expensive, larger cities farther north and on the coasts. The pandemic has catalyzed purchases by millennial first-time buyers, many of whom can now work from anywhere."

Many recent movers say starting a new chapter in their life was among the most rewarding parts of moving to a new home, as 59% said positive life events happened after their most recent move, most commonly citing that they fulfilled a dream or became passionate about something new.