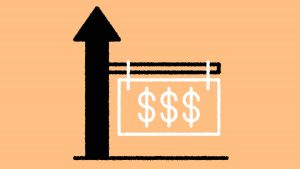 Black Knight Inc., has released the latest iteration of its Mortgage Monitor Report for March 2022 which looks at mounting affordability pressures resulting from the competing dynamics of rising interest rates and ever-increasing home prices.

"After accelerating for the last four months, the rate of annual home price growth actually slowed a bit in March," Graboske said. "Still, at 19.9%—down from an upwardly revised 20.1% in February—March would have otherwise set yet another record for appreciation. Year-to-date, home prices are already up nearly 6% nationwide with nearly 25% of the nation's largest markets seeing gains of more than 7% over the last three months alone. With 30-year interest rates hitting 5.11% as of April 21, the impact these price gains have had on home affordability is significant.”

"As measured by the share of median income required to make the P&I payment on the average-priced home bought with 20% down, U.S. housing was the least affordable ever back in July 2006 when it took 34.1% to make that P&I payment,” Graboske continued. “At the end of February 2022, we were already at 29.1%—and both rates and prices have continued to climb since then. As of April 21, that payment-to-income ratio has now climbed all the way to 32.5%, within just 1.6 percentage points of the prior record. In 'kitchen table' terms, that equates to a $522 higher average monthly P&I payment—a 38% increase since January—with that payment up $790 (+72%) since the start of the pandemic.”

“It won't take much to push us past 2006 levels either; a 50 basis points jump in 30-year offerings or a 5% rise in home prices would push affordability to its worst level on record,” Graboske concluded. “And saying that, we should also keep in mind that they've already risen 200 basis points and 5.9% respectively this year." 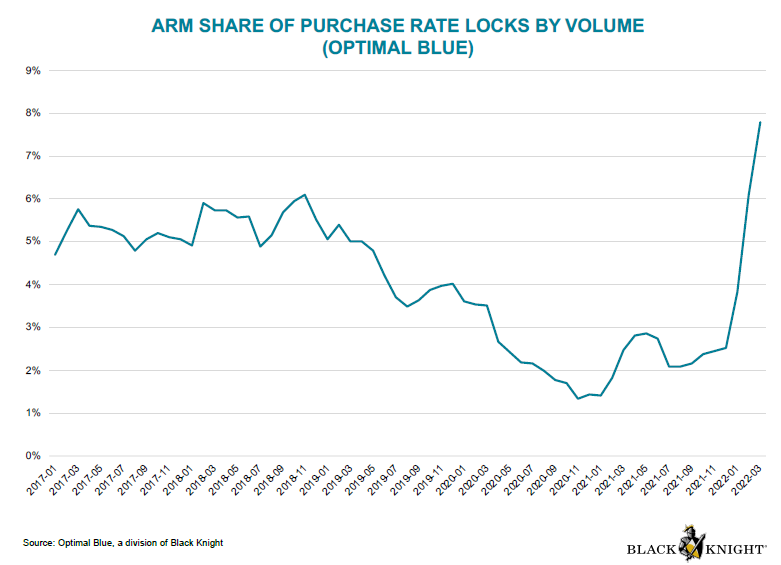 Using rate lock data from Optimal Blue, a subsidiary of Black Knight, this month’s report also found that adjustable-rate mortgages (ARMs) are becoming “increasingly more attractive to borrowers” due to currently low rates. While the spread between a 30-year and ARM is now the widest in has been since 2014, the average 5/1 ACM had a 1.3% lower initial rate than a standard mortgage. This fueled ARM rate locks to rise from 2.5% in December to 8% in March, the largest increase since they began tracking the dataset in 2017.

While the number of ARMs is now at or near a post-financial crisis high, it is still well under the 40% mark the market saw at its peak in 2005.

Also, the risk characteristics of these loans remain conservative: ARMs with 7-10-year introductory periods make up the vast majority of ARM originations (85% in 2021) and the average debt-to-income ratio among March ARM rate locks remained below 31%. Today's average ARM credit score of 757 is also the highest since at least 2017, and the number of outstanding ARMs is the lowest in more than 20 years.

However, nearly 1.4 million ARMs are in the adjustable phase and may face rate hikes in the coming months driven by “sharp” rises in underlying ARM indexes.

Another rising segment of loans are “Expanded Guideline” loans, or as they are colloquially known, non-qualified mortgages (non-QM). All but non-existent before the pandemic, rate locks on these types of loans hit 3% of total rate lock volume. Black Knight said they will continue to track this trend in the future given continued market shifts.

Other high-level takeaways from the report include: