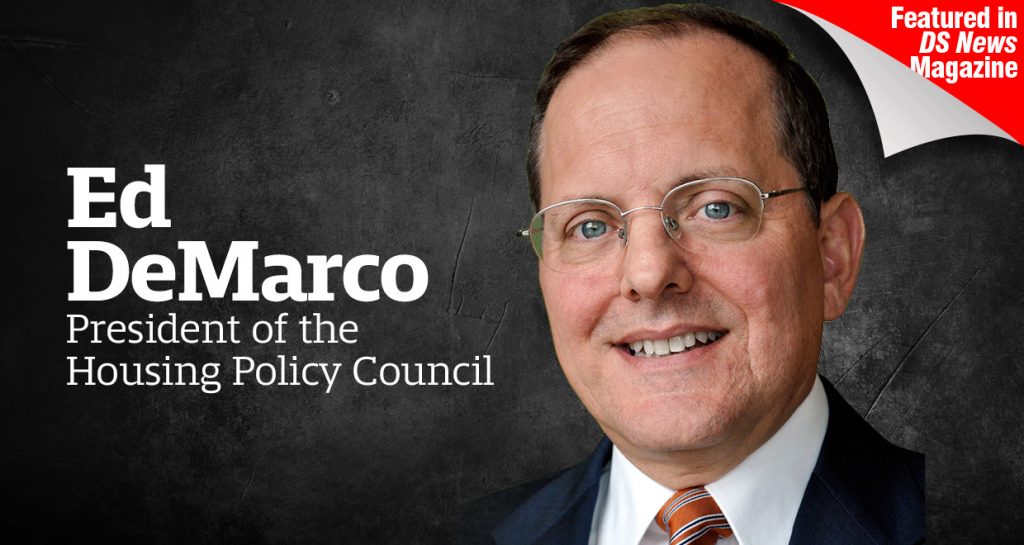 Editor's note: This feature appeared in the June edition of DS News.

Before joining the Housing Policy Council in June 2017, Ed DeMarco was a senior fellow in residence at the Milken’s Institute Center for Financial Markets. From 2009 to 2014, he was the acting director for the FHFA, where he served as a conservator for Fannie Mae and Freddie Mac and regulator of those companies and the federal home loan banks.

DeMarco recently appeared on DS5: Inside the Industry to share his thoughts on recent actions by the federal government to help both homeowners and mortgage servicers.

What are your thoughts on the steps taken to protect homeowners by the federal government?

The federal government and the mortgage industry itself have taken thoughtful and appropriate steps given the circumstances we suddenly face. The idea that there are literally millions of Americans that have suddenly become unemployed, furloughed, reduced income is unexpected, and it really is a direct response of the government to this national health crisis.

For a period of time borrowers that were financially sound and paying their mortgage suddenly have had a major disruption. How does one help them through this major disruption until we return to whatever the new normal is and people’s incomes return and can pay their mortgage? It is consistent with what mortgage servicers have done in the past in areas that have been affected by natural disasters to offer payment forbearance.

That is, “Look, there’s a temporary period of time here where you’re not able to pay your mortgage and we expect at the end of that period, you’ll be back on your feet. So, we will forbear on you paying your mortgage and we will take those forborne payments. You’re still going to owe them, but we will work out the repayment of that once we get through this temporary period.”

It’s an appropriate response by both the servicing industry and by our federal officials to want to take that approach, given this situation.

What further steps could be taken to ensure servicers have adequate liquidity?

When the homeowner misses a mortgage payment, doesn’t pay their mortgage, because they’re on a forbearance plan, the mortgage servicer has to make that payment on behalf of the homeowner.

They have to pay the investor the principal and interest, and they have to make the contributions to the tax and insurance escrows so that those bills are paid on time. The servicer needs to have access to liquidity to make those payments on behalf of the borrower.

Under normal circumstances, servicers operate with reserves and access to commercial lines of credit to be able to make those payments.

What’s unusual here is the incredible magnitude of forbearance that we are anticipating as a result of the pandemic. In the near term, most servicers will be able to make these payments on behalf of their borrowers, but as this thing prolongs, and as it deepens, we’re expecting that mortgage servicers simply are going to need to have access to additional liquidity support to be able to make those payments on behalf of borrowers.

We really do hope that the federal government probably, and most likely the appropriate entity being the federal reserve, would establish a liquidity facility to assist servicers when their normal liquidity resources are insufficient because of the depth and duration of the pandemic.