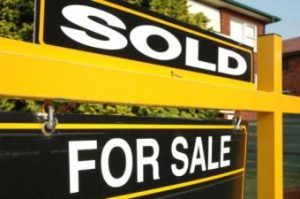 Redfin has found that in the month of May, the national median home-sale price hit a record high of $377,200, up 26% year-over-year marking a new record. In addition, Redfin reported that 54% of homes sold above their list price, another record high, up from 26% a year ago.

The number of homes available for sale fell to a record low, down 27% from May 2020. And in the case of less inventory and high demand, Redfin also saw the typical home sell in just 16 days in May, a record low down from 38 days just one year ago. Home prices were up 24%, a record high due to the dip in home prices at the start of the pandemic a year earlier.

In the month of May, Redfin agents reported that bidding wars were still being waged nationwide, as 70.4% of their homes offered faced competition, down from a revised rate of 73.6% in April. That total is still up significantly from 52.7% as reported by Redfin in May of 2020, which was impacted by pandemic stay-at-home orders.

"May marked the likely peak of the blazing hot pandemic housing market, as many buyers and sellers are vaccinated, and returning to pre-pandemic spending patterns," said Redfin Lead Economist Taylor Marr. "Sellers are still squarely in the drivers' seat, but buyers have hit a limit on their willingness to pay. The affordability boost from low mortgage rates has been offset by high home price growth." 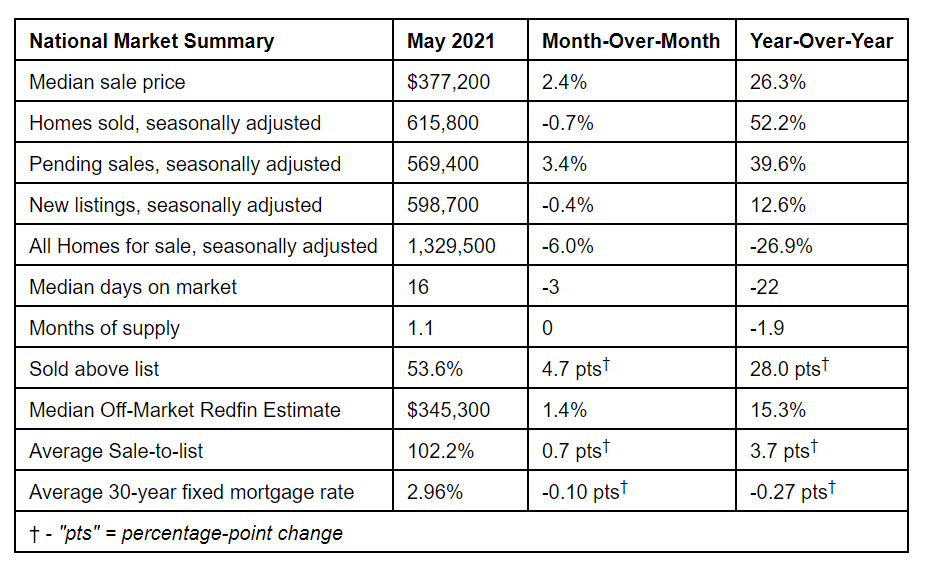 Median sale prices increased from a year earlier in all of the 85 largest metro areas that Redfin tracks, partly due to a shift in the mix of homes that are selling toward larger, higher-end properties. Redfin recently reported that purchases of high-end and luxury homes jumped 26% year-over-year during the three months ending April 30, compared to the 17.8% gain in purchases of affordable homes and the 14.8% increase in purchases of mid-priced homes. The smallest increase was found in San Francisco, where prices were up 2.8% from a year ago. The largest price increases were reported in Austin, Texas (up 42%); Phoenix, Arizona (up 33%); and Detroit (up 32%).

Battling continued low inventory nationwide, the number of homes sold in May was up 46% from a year earlier, but was down 0.7% from April. Compared to May 2020, home sales rose in all of the 85 largest metro areas Redfin tracks. The largest gains in sales were in places that had the most abrupt slowdown of home sales in May 2020, including San Francisco (up 171%); San Jose (up 167%); and Warren, Michigan (up 154%).

Seasonally adjusted active listings—the count of all homes that were for sale at any time during the month—fell 27% year-over-year to their lowest level on record. Only seven of the 85 largest metros tracked by Redfin posted a year-over-year increase in the number of seasonally adjusted active listings of homes for sale, with Philadelphia (+14%), New York (+13%), and San Francisco (+12%) experiencing the biggest gains. The biggest year-over-year declines in active housing supply in May were found in Baton Rouge, Louisiana (-60%); and North Port, Florida (-51%).