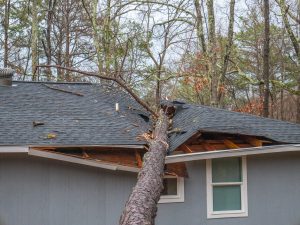 Record low mortgage rates, the ability to work remotely, and the need for increased space during the pandemic gave rise to the spike in second home and investment properties. According to Redfin, the purchase of second homes was up 37% higher in 2020 and 2021 compared with 2018 and 2019. Demand has since fallen back below pre-pandemic levels, as life slowly returns to a state of normalcy, but many Americans now own at-risk second homes, which has implications for the future.

“The threat of climate change isn’t the top concern for a lot of homebuyers, which means they often prioritize factors like warm weather and proximity to the beach over avoiding natural-disaster risk,” said Redfin Senior Economist Sheharyar Bokhari. “Second-home owners, in particular, have another place to live if disaster strikes—another reason climate danger may not feel like a pressing issue. But house hunters should be aware that purchasing in a disaster-prone area not only puts them and their home at risk, but their finances as well. Home values in climate-endangered places may fall in the coming years as consumers learn more about the risks to properties in these areas.”

“House hunters from out of town ask about climate change because they’re very concerned about flooding, but most of them don’t change their minds,” said Miami Redfin Agent Cristina Llanos. “They hear horror stories of hurricanes, but generally still move forward. People want to talk about it, but it typically doesn’t make or break their decision.”

Overall, heat was the most common risk facing second-home and investment buyers, as nearly all (94%) of second homes purchased in the past two years face high heat risk. Second was high storm risk, which plagues more than three-quarters (78%) of second homes bought in the past two years, followed by high flood risk (26%), high fire risk (23%), and high drought risk (21%). 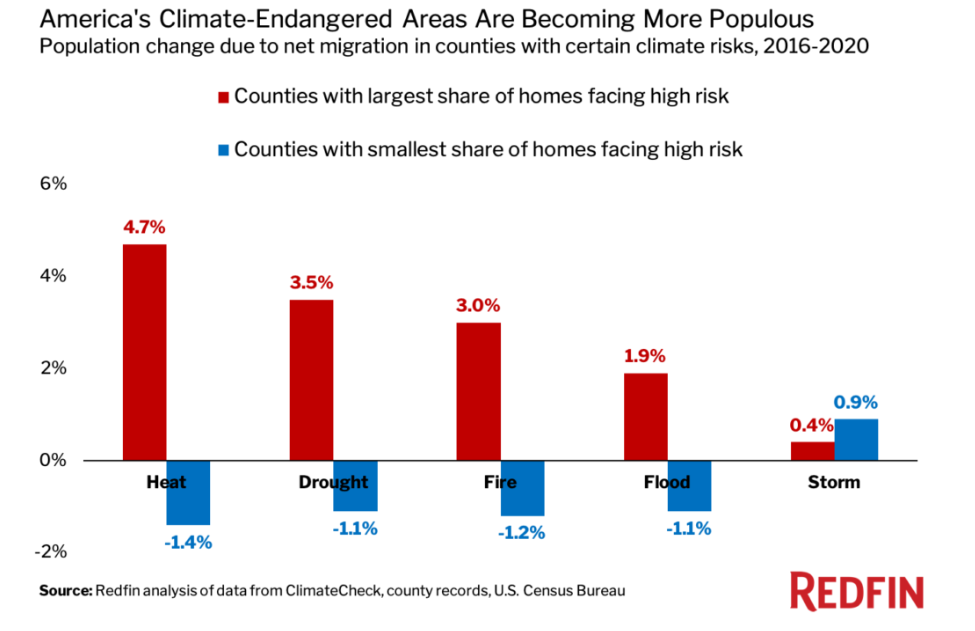 Of the areas with high heat risk, 37 were in the South, with one-third (17) in Florida alone. More than half (33) of those 50 counties experienced positive net migration over the last five years. Williamson County, Texas—part of the Austin metro area where every home faces high heat risk—saw its population grow 16.3% due to positive net migration from 2016-2020. That’s the highest growth rate of the 50 counties Redfin analyzed, and was followed by Pinal County, Arizona (just south of Phoenix), which had a positive net migration rate of 15.5%. Rounding out the top five were three Florida counties: Pasco County (15.4%), Osceola County (14.6%) and Manatee County (13.5%). Migration to places with high heat risk has accelerated over time, as all but one of the top five counties saw their net migration rates increase from the prior five-year period—2011 through 2015. The largest jump was in Pinal County, where the rate jumped from 4.1% (2011 through 2015) to 15.5% (2016 through 2020).

“Homebuyers in Williamson County sometimes ask about utility costs—especially after the major power outage caused by the snowstorm this winter—but they don’t seem too concerned about the heat,” said Redfin Real Estate Agent Barb Cooper. “Part of that may be because you don’t know what you don’t know; if you come from an area that hasn’t experienced significant heat or drought, you might not be aware of the implications for homeowners. For example, when it gets hot and dry here, local authorities often put restrictions on how much water homeowners can use, shut down car washes and only let people water their yards on certain days.”

Drought risk is based on expected water-supply stress, which measures how much of the available water in an area is used by humans. Of the 50 counties with the highest share of properties facing high drought risk, Redfin found that 34 were in the West, with 21 in the state of Colorado alone. More than half (38) of those 50 counties experienced positive net migration over the past five years. Custer County, Colorado—a rural area south of Denver where nearly every home faces high heat risk—experienced 16.8% population growth due to positive net migration from 2016 through 2020. That’s the highest growth rate of the 50 counties Redfin analyzed. It was followed by Denton County, Texas (north of Dallas), which had a positive net migration rate of 13%. Next came Oconee County, Georgia (12.6%), Huerfano County, Colorado (11.9%), and Chaffee County, Colorado (11.5%). All five counties saw their net migration rates increase from the prior five-year period. 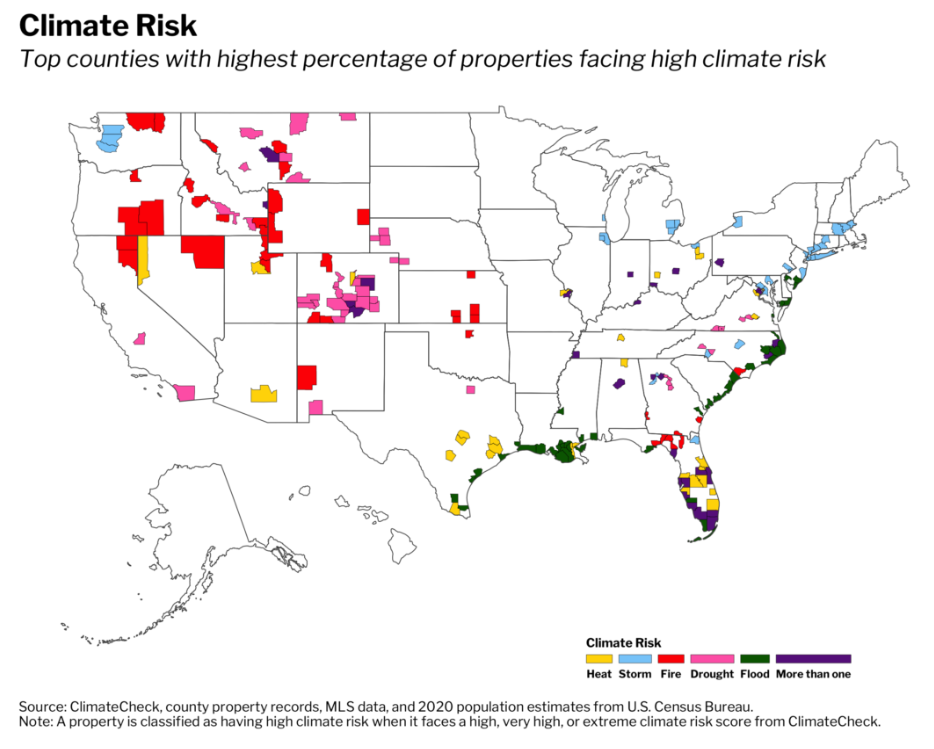 “For the most part, the buyers and sellers don’t seem too worried about fires. They’re more concerned about droughts and water shortages,” said Ryan Aycock, Redfin’s Market Manager in Salt Lake City. “We’ve had a lot of near misses in Utah—there will be a fire warning, and then the fire isn’t as bad as people feared. It’s a bit of a boy-who-cried-wolf situation. A lot of folks could be caught flat-footed if a major fire does hit their community. Anyone who’s considering moving to the area should read the local fire planning and evacuation guides and create their own plan of action, so they’re prepared when fires hit.”

Of the 50 areas most susceptible to flood risk, a majority (47) were found in the South—specifically in Florida, Louisiana, and North Carolina, with Horry County, South Carolina, which includes Myrtle Beach, experienced 17.6% population growth from 2016-2020 due to positive net migration.

And of the 50 counties with the highest share of properties facing high storm risk, a majority were found in the Northeast or Southeast, with Lee County, Florida (which includes the cities of Cape Coral and Fort Myers) experienced 12.7% population growth from 2016 through 2020 due to positive net migration. That’s the highest increase among the 50 counties Redfin analyzed. It was followed by Brevard County, Florida (includes Cape Canaveral), which had a positive net migration rate of 9.2%. Next came Hillsborough County, Florida (includes Tampa) at 7.2%, Wake County, North Carolina (includes Raleigh) at 7%, and Pierce County, Washington (includes Tacoma) at 5.4%.