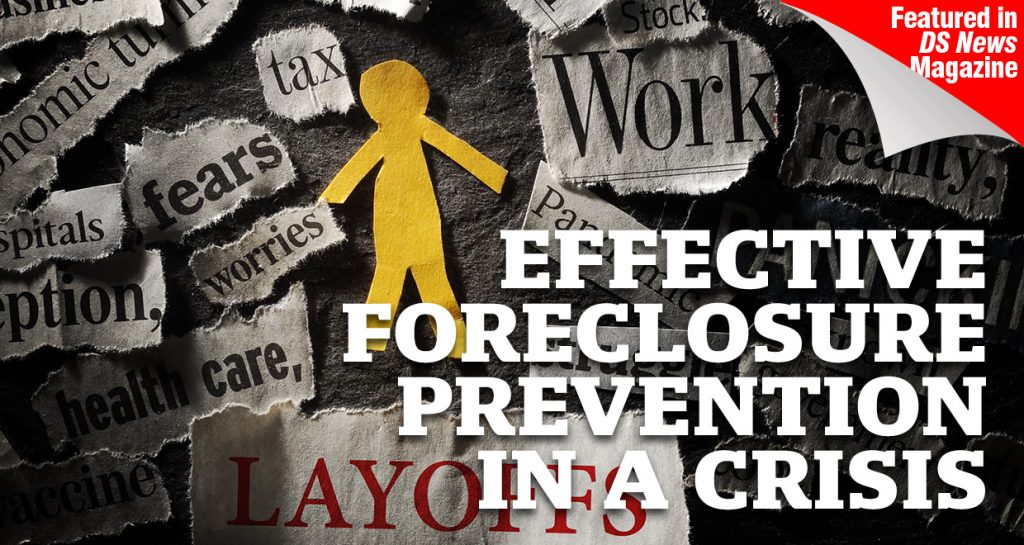 Proactive and relatively short-term mortgage forbearance paired with pragmatic loss mitigation solutions has proven to be the most effective combination for preventing unnecessary foreclosures following a market crisis—without perpetuating the pain of that crisis. And while foreclosure moratoriums can bring short-term relief to a market in crisis, they are ineffective and even potentially harmful when used as a long-term foreclosure prevention treatment.

These are lessons that jump out when reviewing foreclosure and home price data in the aftermath of the Great Recession of 2008 as well as more recent, regional market trauma caused by natural disasters.

New Jersey serves as a cautionary tale for overreliance on the moratorium as a foreclosure prevention tool. In response to the robo-signing accusations that came to light in late 2010—involving questionable foreclosure documentation practices—the New Jersey State Supreme Court imposed a statewide foreclosure moratorium that extended for nearly a year. Although individual servicers instituted voluntary moratoriums in the wake of the robo-signing accusations, New Jersey’s blanket statewide moratorium was one of the most extensive and lengthy to be implemented at the state level. In the short term, the New Jersey moratorium had its intended impact in the form of a dramatic drop in completed foreclosure auctions, which decreased 67% in 2011 compared to 2010, according to an Auction.com analysis of public record data from ATTOM Data Solutions. But not long after that moratorium was lifted, completed foreclosure auctions in New Jersey began to rise, increasing 43% in 2012.

And that increase was not just a one-year catch-up. Completed foreclosures in New Jersey increased for the next five years, returning to the pre-moratorium level of more than 9,500 in 2014 and eventually hitting a peak of more than 23,000 in 2017—up an eye-popping 652% from 2011. That trend stands in stark contrast to what was going on nationwide, where completed foreclosures peaked in 2010 before beginning a steady downward trend that continued through 2019. No national foreclosure moratorium was implemented during this time. Much of the national decline following 2010 was driven by states such as California and Arizona, which were less impacted by the robo-signing issue and did not implement a statewide foreclosure moratorium.

One example of this is Ohio, where the state legislature considered but never enacted a statewide foreclosure moratorium. After hitting an initial peak in 2010, completed foreclosures in Ohio declined 13% in 2011, much less than the 67% drop in New Jersey. Completed foreclosures in Ohio rebounded higher for the next two years—a relatively brief uptick compared to the six-year upward trend in New Jersey—before embarking on a six-year downward trend from 2014 through 2019. During the thick of the housing crisis, Ohio registered a much higher foreclosure rate than did New Jersey.

And New Jersey is far from done working through the long tail of legacy distress from the last recession, even as another recession hits. Fifty-seven percent of all completed foreclosure auctions in New Jersey in 2019 were tied to properties purchased during the housing bubble of 2003 to 2008 according to the ATTOM data. Nationwide, the percentage of completed foreclosure auctions tied to bubble-era purchases first fell below 57% in 2015 and dropped to a new low of 39% in 2019.

New Jersey’s low-grade foreclosure fever over the past five years has contributed to a slower rebound in home values when compared to Ohio and the nation as a whole. An analysis of median home price data from ATTOM shows that while New Jersey home prices have increased 40% since bottoming out in February 2012, they are still 7% below the pre-recession peak in July 2007. By comparison, Ohio home prices have jumped 110% from the bottom and are 25% above their pre-recession peak. Nationwide, median home prices are up 82% from the bottom and are 17% above their pre-recession peak. Lingering legacy foreclosures contribute to slower home price growth in at least two ways: the market uncertainty associated with a shadow inventory of unresolved distress; and the drag on surrounding home values that comes with an elevated share of distressed sales.

The more sluggish housing recovery in New Jersey also meant that housing markets there were more susceptible to subsequent, more localized market shocks: Hurricane Sandy in 2012 and Atlantic City casino closings from 2014 to 2016. By contrast, housing markets in Florida and Texas were more prepared to absorb the shock of the hurricanes that hit those states in the summer of 2017. Before the hurricanes hit, median prices in Florida had rebounded 99% from the bottom and were just 9% below the pre-recession peak while median prices in Texas had rebounded 75% from the bottom and were 45% above the pre-recession peak (home prices were not hit as hard in Texas during the Great Recession).

The bigger home equity cushion in both Texas and Florida certainly helped to soften the foreclosure impact caused by the 2017 hurricanes, but policymakers and servicers also implemented a highly effective foreclosure prevention strategy that combined an instantly activated, but relatively short-term, foreclosure moratorium with pro-active forbearance that transitioned into sustainable loan modification for distressed homeowners. In Houston, for example, Fannie Mae, Freddie Mac and the Federal Housing Administration (FHA) all enacted 90-day foreclosure moratoriums for areas impacted by Hurricane Harvey just days after the hurricane hit the city in late August 2017.

Fannie and Freddie ended that moratorium after the initial 90 days while FHA extended its moratorium another 90 days, through the end of February 2018. Pro-active forbearance was offered to impacted homeowners concurrent to those foreclosure moratoriums. Fannie Mae, for example, authorized servicers to “grant an initial forbearance plan of up to six months with the possibility of extension to any borrower who they suspect has been impacted by a natural disaster.” In the Fannie Mae example, servicers were encouraged to identify the best loan modification option for distressed borrowers to help them transition out of forbearance and not fall behind on mortgage payments. In an analysis published in September 2019, two years after Hurricane Harvey, Fannie Mae found that 55% of loans in hurricane-impacted areas that became delinquent after the hurricane were modified. The Fannie Mae analysis also found that just 4.6% of loans in impacted areas that

NO FLOOD OF DAMMED-UP DISTRESS

The Black Knight analysis also found that only 1% of loans that became seriously delinquent in the wake of Hurricane Harvey had gone to foreclosure sale by February 2020. Similarly, data from the Auction.com platform shows a relatively mild uptick in foreclosure auctions after the moratoriums were lifted. Completed foreclosure auctions rose above pre-hurricane levels starting nine months after the hurricane, in May 2018, but fell back below pre-hurricane levels starting in December 2018, 15 months after the hurricane.

The combination of a relatively brief foreclosure moratorium paired with robust forbearance and loan modification helped Houston prevent crisis-induced foreclosures while also avoiding a massive flood of dammed-up distress crashing into the housing market down the road. This approach also helped home values in Houston stay afloat: home price appreciation in the metro area slowed to 1% in September 2018, in the midst of the post-moratorium foreclosure uptick, but never went negative, according to an analysis of public record data from ATTOM Data Solutions. Since that low point in September, home price appreciation in Houston has averaged a healthy 4% each month.

The COVID-19-triggered crisis is neither a natural disaster nor a repeat of the Great Recession, but lessons from the 2008 and 2017 crises can still be applied, including the lesson of how to achieve effective foreclosure prevention without inflicting long-term harm to the housing market. The COVID-19-related forbearance policies put in place thus far by the Federal Housing Finance Administration (FHFA), which oversees Fannie Mae and Freddie Mac, as well as FHA, have laid a solid foundation for effective foreclosure prevention in the aftermath of this crisis.

These forbearance programs were introduced quickly and pro-actively by the CARES Act, signed into law exactly two weeks after the national emergency declaration relating to the COVID-19 crisis. Since then, both FHA and FHFA have introduced sensible plans that allow many borrowers to exit forbearance without experiencing an immediate deferred payment shock. Furthermore, these forbearance-exit plans will prevent borrowers from experiencing negative credit ramifications when they refinance their loan or buy another home. With these robust forbearance programs in place, the foreclosure moratorium that now extends through August 31, 2020, can safely be lifted, preventing a large backlog of deferred distress from building up even while the forbearance programs provide ample foreclosure protection for homeowners impacted by the COVID-19 crisis.