By a vote of 57-40, the U.S. Senate today confirmed Dana Wade as Assistant Secretary for Housing – Federal Housing Commissioner. She will step into a role previously occupied by The Hon. Brian D. Montgomery, now serving as Deputy Secretary of the U.S. Department of Housing and Urban Development.

“I want to congratulate Dana Wade on her confirmation by the United States Senate to serve as the Commissioner of the Federal Housing Administration,” Carson said. “Dana has been a tremendous asset to the Department and the Administration throughout her years of service, and I have full confidence in her ability to successfully lead FHA.”

Deputy Secretary Brian Montgomery added, “I join Secretary Carson in congratulating Dana on her confirmation and welcoming her back to FHA, where I know she will do an outstanding job serving the American people. We are grateful to have her considerable talents and knowledge to help guide the agency as our nation pulls through this pandemic.” 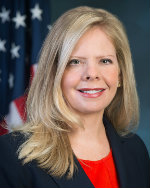 “I’m extremely grateful for this opportunity to hit the ground running during this critical time for our nation’s housing markets,” Commissioner Wade said.

"I congratulate Dana Wade on a well-deserved confirmation as the next Federal Housing Commissioner," said Ed Delgado, President & CEO of Five Star Global. "I look forward to her continuing the transformative work begun by now Deputy Secretary Brian Montgomery as HUD and FHA work to help guide our American system of homeownership through the continuing health and economic crisis and on toward recovery."

Robert D. Broeksmit, President and CEO of the MBA, said in a statement, "MBA applauds the Senate for confirming Dana Wade to be the next FHA Commissioner. During her tenure at HUD, Ms. Wade has been an integral part in strengthening the various programs that provide affordable housing opportunities and assistance to homebuyers and renters. With her expertise and experience, I am confident that Ms. Wade will be successful in developing workable solutions during this unprecedented time."
FHA currently insures more than eight million single-family mortgages, almost 12,000 mortgages for multifamily properties, over 3,700 mortgages for residential care facilities, and nearly 100 mortgages for hospitals.

HUD's release notes that "Wade previously served as Acting Federal Housing Commissioner and Assistant Secretary for Housing from July 2017 to June 2018, where she oversaw over 2,400 employees and implemented enhanced risk management and monitoring of FHA’s $1.3 trillion portfolio.  Wade also served as a Program Associate Director for General Government at the Office of Management and Budget from December 2018 to December 2019, where she led budget oversight for six Executive Branch agencies with a keen focus on financial services, including HUD, and multiple independent agencies."