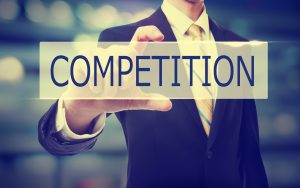 In a market with inventory that, in many parts of the country, does not come close to meeting demand, the level of competition for houses has been intense, especially as buying picked up during pandemic-fueled remote work trends and resultant migration to more affordable and spacious abodes. Gradually, data show, home prices are stabilizing, supply is increasing, and that makes for slightly less-brutal bidding battles among homebuying hopefuls, according to the latest from researchers at Redfin.

In July, 60.1% of home offers written by Redfin agents faced competition, down from a revised rate of 66.5% in June and a pandemic peak of 74.1% in April, according to a new report.

It's also typical for competition to ease in the summer following the spring homebuying season, the researchers note.

Agents in some of the country's most cutthroat markets report a reduction in overbidding and exceptions made in hopes of winning the bid like waiving inspection and appraisal contingencies and buying homes sight unseen.

"Competition has started to slow in the last three weeks. We're now seeing five to eight offers on homes instead of 25, and they're coming in $5,000 to $10,000 above the listing price instead of $50,000 to $60,000," said Scott Mercer, a Redfin real estate agent in Sacramento, California. "Buyers are pushing back. They've even started including appraisal contingencies again and making requests for repairs—things that were pretty much unheard of last year."

The percentage of Redfin offers that faced bidding wars in Sacramento was 72.9% in July, down from 77.2% in June, putting it in sixth place.

Mercer points out that slowing migration could be leading to reduced competition in some places.

"A slowdown in the migration of tech workers from the Bay Area is the biggest factor driving the drop in competition in Sacramento," Mercer said. "Sacramento exploded in popularity among remote workers during the pandemic. People coming from San Francisco were like kids in a candy store here because home prices were so inexpensive in comparison. But we're no longer seeing as big of an influx of those folks, likely because families can finally travel again and employers are asking people to come back to the office. It will be interesting to see if migration to Sacramento rebounds if the COVID situation continues to worsen."

That said, Sacramento was still the third-most-popular migration destination in Q2. That's based on net inflow, a measure of how many more Redfin.com home searchers looked to move into a metro than leave. Nationally, migration did slow slightly, with 31.1% of Redfin.com users looking to move to a different metro in the second quarter, down from 31.5% a quarter earlier.

The full report from Redfin is on Redfin.com.