Industry Recognizes Leadership and Service to the Nation 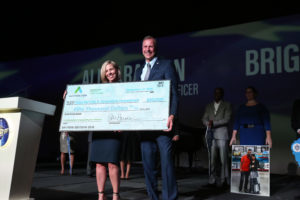 An industry veteran with more than 25 years of financial services experience in the U.S. and internationally, McDougall has worked in mortgage and retail banking with a particular emphasis on mortgage servicing, business development, and post-closing. She currently serves as EVP, Chief Loan Administration Officer for Caliber Home Loans.

While accepting the award, McDougall said that the industry had come a long way, battling the cyclical nature of the housing and mortgage business as well as the regulatory changes and pressure. “I challenge us all to continue to think outside of the box, and about our industry from the perspective of our customers not only from a compliance perspective,” she told the audience.

McDougall said that it was interesting to see how many of the technological advances that were envisioned 18 years ago had been realized today. “It is even more interesting, however, how many opportunities the technologies present that the mortgage industry has not yet taken advantage of,” she said. “We must continue to act like mortgage bankers and innovate by leveraging the ever-expanding toolkit available to us.”

Robert Klein (1953-2018), founded Safeguard Properties in 1990 and built it into the largest national mortgage field services company in the U.S. After stepping down as CEO in 2010, Klein's ingenuity continued with the creation of Community Blight Solutions, a company focused on eliminating urban blight. Klein was also Founder and Chairman of SecureView and RIK Enterprises.

Receiving the award on behalf of Klein’s family and Safeguard Properties, Alan Jaffa, CEO Safeguard Properties and Klein’s son-in-law said that Klein was an integral part of making the industry what it is today. “Robert was always the first to step in and tackle the issues head-on. He brought the industry together to open up the dialogue, which often led to significant change. He pushed the industry to be different and better every day,” Jaffa said. “Along the way, Robert wasn’t worried about the financial impact of these changes. He would take the loss because he was more concerned about doing what was right–for the property and the community.” 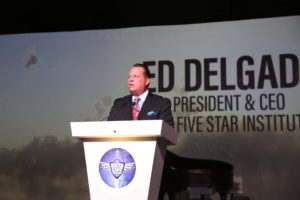 The Keys for Life event was capped by the annual tradition that gives it its name: the presentation of mortgage-free homes to five United States military veterans and their families, courtesy of JPMorgan Chase, Auction.com, and Operation Homefront.

Acknowledging the commitment of the sponsors to this initiative, Ed Delgado, President, and CEO of the Five Star Institute said that JPMorgan Chase would be gifting their 1,000th mortgage-free home to a veteran in November, and that gift was facilitated by Operation Homefront.

“This is the eighth year that the Five Star Institute has had the privilege of facilitating the presentation of mortgage-free homes to veterans,” Delgado said. “Every time I have the privilege of speaking with a veteran, I’m struck by the measure of commitment that enables these brave men and women to dedicate their lives to the service of protecting our nation. They deserve our deepest gratitude and respect.”

Recognizing Operation Homefront’s initiatives to help veterans and their families transition successfully to their local communities, Ali Haralson, Chief Business Development Officer, Auction.com presented a check of $50,000 to the organization. This is the seventh check of this denomination that Operation Homefront has received from the real estate auction company.

“At Operation Homefront, our mission is to build strong, stable, and secure military families so they can thrive, not simply struggle to get by, in the communities that they've worked so hard to protect,” said Brig Gen (ret) John I. Pray, Jr., president and CEO of Operation Homefront. “The good news is we offer a variety of impactful programs that allow us to accomplish our important work.”

One such program is the Homes on the Homefront program through which the organization awards mortgage-free homes. “At the Five Star Conference’s Keys For Life reception, we have an opportunity to award homes to a very special and deserving group of our fellow citizens who have done so much for all of us,” Pray said. “This year, five amazing military families will receive homes that will help them transition successfully to their local communities.”

The evening ended with a soulful concert by American singer, songwriter, actress and author, LeAnn Rimes, but before that the audience bid with gusto for five guitars signed by the artiste, the proceeds of which will go to Operation Homefront’s initiatives for veterans.