Home / Daily Dose / The State of the Single-Family Rental Market 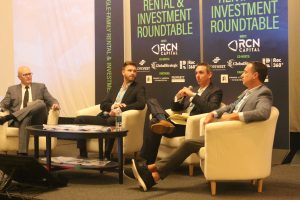 As part of the third day of the Five Star Conference and Expo in Dallas, the returning Single-Family Rental and Investment Roundtable dedicated four hours of discussion to the opportunities and headwinds facing investors and other professionals working in the SFR space.

The event, hosted by RCN Capital, co-hosted by CoreVest Finance, Global Strategic, and Roc 360, and in partnership with Finance of America Commercial and Property Masters, brought together investors and service providers to discuss challenges such as home prices and affordability, inventory constraints, and how to drive growth within the sector. In addition, panelists examined the overall state of the industry, lending and exit strategies, the increasing importance of built-for-rent homes, property management, valuations, tech tools, and applications.

“Today, there are approximately 121 million households in America,” said Jeffrey Tesch, CEO of RCN Capital, during his opening keynote. However, he then posed the question, “What is a household? It could be one person in a single-unit apartment, or it could be a family of eight in a home. Of that, 43.8 million are rented.”

According to Tesch, of those 43.8 million rental units, 14.7 million (or 34%), are owned by property owners with just a single property. Owners with 2-4 properties make up 17% of the rental market, while 45% of units are owned by individuals with five or more properties.

When asked about how to seek out new opportunities for investors, Delgado said he developed a thesis around Major League Baseball to help direct his search for new properties.

“If you look at Major League Baseball and the cities with teams like the Washington Nationals, the Seattle Mariners, the San Francisco Giants, [investors] may not find a lot of opportunities there,” Delgado said. “But if you look at the AAA and AA teams, you start thinking to yourself that maybe those smaller cities make a lot of sense. So, if you are out there looking at secondary and tertiary markets, you might find yourself in a pretty good position.”

Herriage agreed with Delgado and added that buyers should not just look at the population size of a city to purchase property in but to look for amenities such as regional trauma centers, colleges, and commercial retail centers such as Wal-Mart in order to focus on specific communities.

Brandon Kirkham, COO of JGM Property Group, moderated the final panel of the day, designed to teach independent property owners best capitalize on their investment and discussed where their money is best spent to get the most return out of their investment. The featured panel included Zach Bassett, VP of Field Operations for Property Masters; Trey Cummings, CEO of CS Equities LLC and Omega Realty Group; and David Gray, director of mid-Atlantic sales for Temple View Capital.