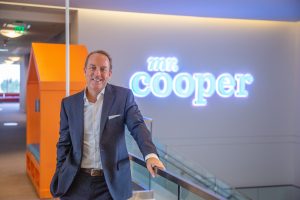 “Positive,” “optimistic,” “friendly,” “people person,” “innovative,” “expert” … these are just a few ways that people who have worked with him describe the leadership style of Tony Ebers, COO of Mr. Cooper Group.

It is perhaps these traits, along with his innate ability to put customer experience before everything else, that’s driving the company culture at Mr. Cooper Group today.

“In his role as our COO, Tony has taken on our companywide initiative to create an experience that places the home, rather than the transaction or loan, at the center of everything we do for our customers,” Jay Bray, President and CEO of Mr. Cooper Group, Inc., told DS News. “I’m personally very excited about the work he and his team are doing and the successes we are starting to see.”

For Ebers, the power of the success behind these initiatives lies not with one person but all employees.

“It really starts with, what is the purpose of your company? What do you stand for, how you treat team members. Is it a meritocracy? How do you reward not only results but also behaviors,” Ebers continued, “If you get that right, then you have a dedicated workforce that’s highly engaged. Then you are in a position to focus on high-end customer satisfaction.”

Speaking about how employee engagement was integral to any company’s success, Ebers said that it all starts with how smart and innovative you are to forge a successful growth path.

“You can’t even be in business if you’re not smart, good at product development, technology, managing compliance,” Ebers said. “But a healthy organization, one of high morale and high engagement, that amplifies the results of a smart company.”

Looking back at his career, Ebers said that anytime a company functioned well, you could tie that success back to an “engaged workforce and a compelling vision of the future that people believed in.”

Giving an example from the financial crisis of how smart, engaged people collaborating together could change the course of the industry, Ebers, who worked with IndyMac at that time, said they worked closely with the FDIC, the OCC, Treasury, “and a really smart team of individuals at One West to come up with the Home Affordable Modification Program.”

“Many people played a role in that, but coming up with the industrywide solution to help people retain homeownership during the financial crisis was a difficult, humbling time. Being part of that solution, helping navigate it, and, over time, earning the respect of mortgage lenders back again, has been an important process,” Ebers said.

Over the years, Ebers has helped develop numerous innovations that have changed the industry for the better, according to Kurt Johnson, Chief Credit Officer at Mr. Cooper Group, who has known Ebers for more than 15 years.

“In my years of working with him, he has been at the forefront of initiatives including loan modifications, business process outsourcing, streamline refinancing, workforce optimization and diversification of servicing revenues, and  that names only a few that have transformed our industry. In all instances, Tony’s been a leader and the industry followed,” he said.

Bill Glasgow, President and CEO of Glasgow Mortgage Advisors, and one of Ebers’ oldest friends and colleagues, also pointed out that Ebers’ “drive and determination in setting standards of excellence with not only himself, but the industry as a whole,” has changed the business for the better.

“Tony has served the mortgage industry as a leader and visionary selling in both mortgage servicing and mortgage production disciplines—a rare combination,” Glasgow said. “His dedication to the company and industry is supported by a work ethic and core values that explains, in part, his career progression to the role of COO in two major mortgage companies in the last decade.”

During this time, Ebers has also stayed true to the commitment to his work and the people around him. Perhaps that’s the reason he elicits complete loyalty from his team and peers. “I know dozens of people, at Mr. Cooper and Xome today for instance, who are there because Tony is responsible for bringing them in,” said Rayman Mathoda, CEO, Xome. Mathoda puts it down to the positivity he brings to the workplace.

“I’ve only been a part of his core team a short while, but I can say that from the perspective of a peer, Tony’s a loyal colleague and a good friend to people,” Mathoda said. “There’s always a lot of dynamism wherever he goes, because he’s one of those people who’s always trying to create positive change.”

Being a good friend also means inspiring them to do the right thing and setting an example by holding yourself accountable to those high standards. According to Gavin Brady, SVP, Mr. Cooper, Ebers’ ability to lead by example is paramount.

“His honesty in directing people, being upfront, and really motivating them, is second to none in terms of setting bars, and also holding himself accountable,” he said.

Ebers’ passion to do the right thing has been noticed across the industry.

“Tony Ebers is a person who is always all-in. Tony sets his mission and goals, and then executes to success. If there’s a hill to be taken, he was always front and center leading the charge,” said Joseph Otting, Comptroller of the Currency. “Tony is one of the U.S. experts on residential mortgaging and servicing, and he uses his talents and skills to make homeownership available and affordable for all Americans.”

Today, Ebers believes that the industry must focus on some areas that are likely to play a larger role moving forward. One is the liquidity at Ginnie Mae that many bank and nonbank servicers are likely to take advantage of in the near future. The other is the equity in the market that is likely to soften the blow if another downturn does happen.

“If you think about last time, it was just the lack of equity and people that weren’t credit qualified to be in that loan,” Ebers said. “But over the last 10 years, the ability to repay was critical, creating a lot of equity, especially home equity. There may be a regional downturn, but it will be nothing like we experienced 10 years ago.”

What does he think about becoming the recipient of Five Star’s 2019 Lifetime Achievement Award?

“There are so many brilliant minds in this industry and, quite honestly, you can’t do it all by yourself,” Ebers told DS News. “The great, smart people I’ve always worked with and those around me keep me motivated to face the next challenge head-on. But it’s so humbling to receive this award. I’m excited and want to share it with all the people I’ve ever worked with as well, as that’s what it’s really all about.”

2019-09-25
Radhika Ojha
Previous: An Eye on Trends in Fintech and Foreclosure
Next: Recognizing Women’s Voices in Mortgage