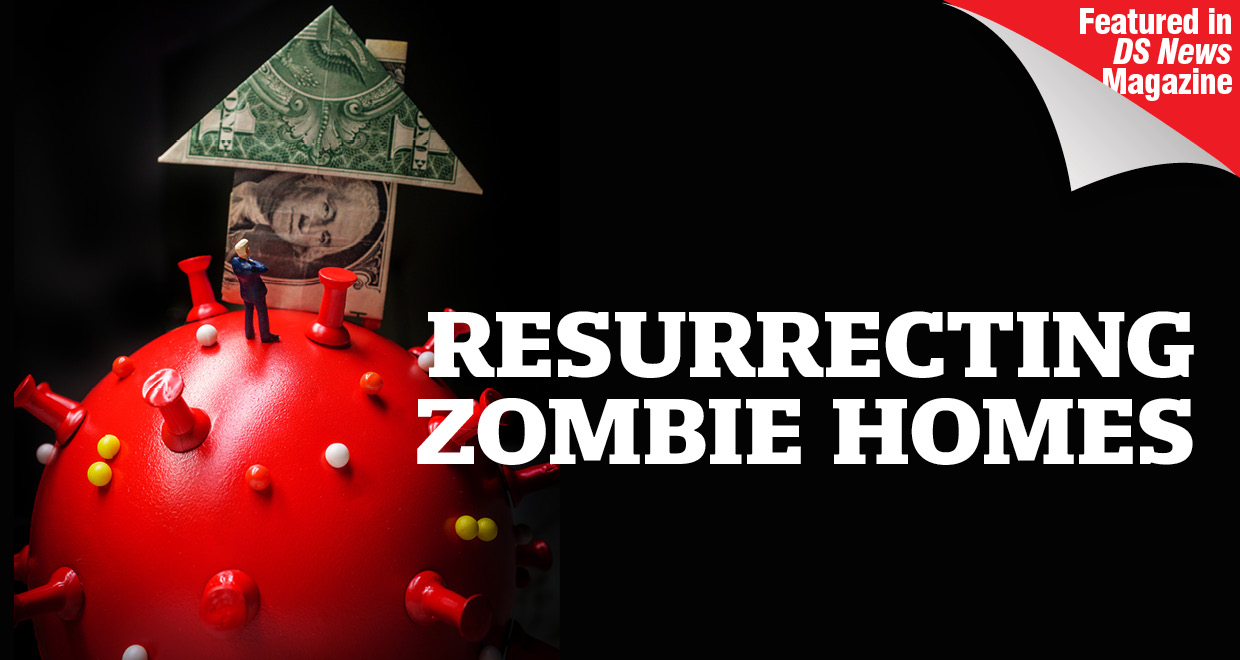 This story originally appeared in the October edition of DSNews, out now.

A solid economic recovery and red-hot housing market helped drive the vacant “zombie” foreclosure rate to new lows in the first half of 2020, even as the coronavirus crisis threatens to trigger a resurgence in these vacant properties stuck in foreclosure limbo.

Where Zombies Are Rising

The zombie foreclosure rate increased in Q3 2020 compared to the previous quarter in 127 out of 158 metropolitan statistical areas (80%) with at least 100,000 residential properties, according to the data. The actual number of zombie foreclosures increased from the previous quarter in 72 of the 158 metro areas (46%), including New York, Los Angeles, Houston, San Francisco, and Phoenix. 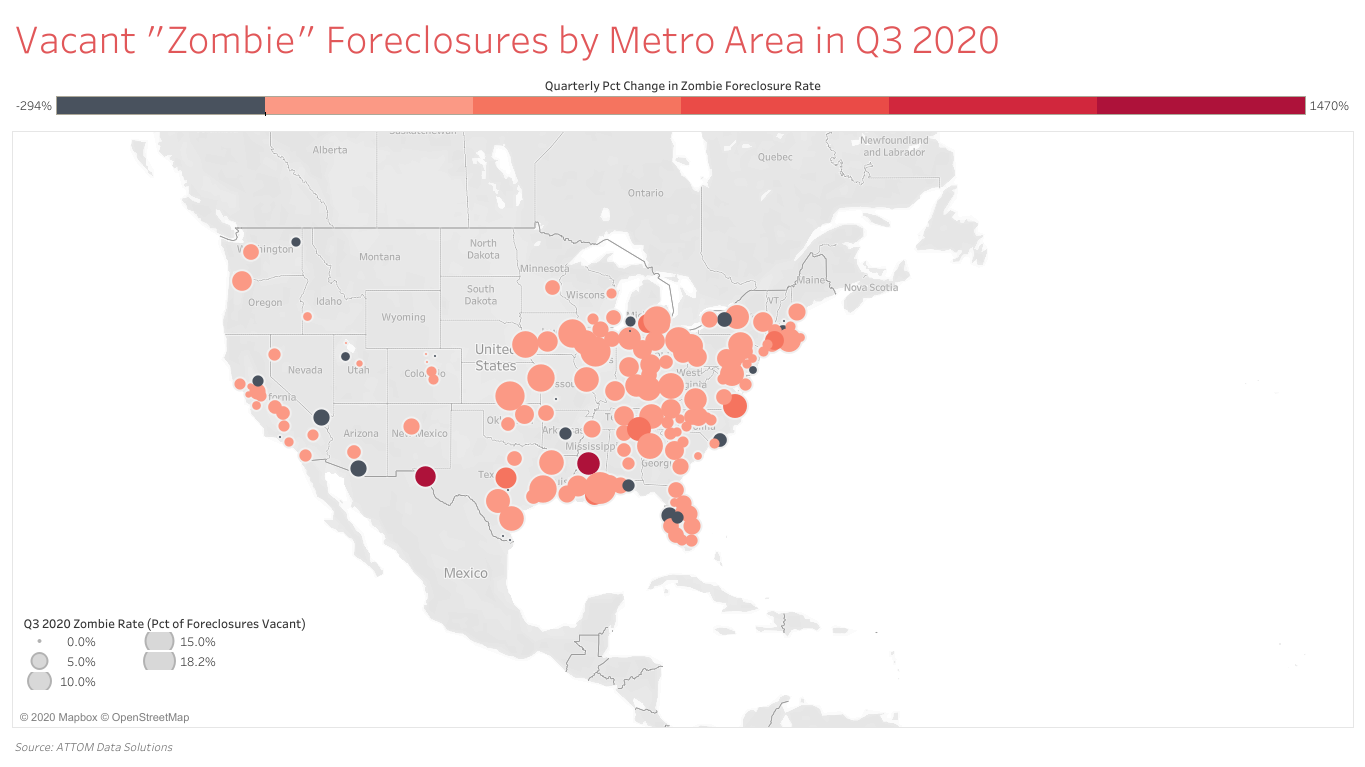 Additionally, seriously delinquent loans secured by vacant properties could represent a more significant rise in zombie foreclosures soon. Although there is no definitive data on vacant properties with mortgages that are at least 90 days late, applying the same 3% “zombie” foreclosure rate to the 1.8 million mortgages that were seriously delinquent in June—that according to Black Knight—would translate into an additional 56,000 zombie foreclosures waiting in the wings. Given the recent sharp rise in seriously delinquent loans, that 56,000 would represent a 197% increase from the previous month and a 312% increase from a year ago.

Local markets and neighborhoods with high zombie foreclosure numbers back at the peak in Q1 2014—still in the midst of the cleanup from the housing carnage left over from the Great Recession—struggled to deal with the flood of abandoned foreclosures.

“Many homes did not make it through foreclosure because servicers did not move quickly enough, either due to capacity issues or due to the decline in home prices reducing their incentive to foreclose,” said Julia Gordon, President of the National Community Stabilization Trust (NCST), a nonprofit organization focused on promoting homeownership in distressed neighborhoods. “In other cases, the 'robosigning' scandal—in which the foreclosing parties could not demonstrate their ownership of the loan—caused judges to stop foreclosures across the board, for both occupied and vacant properties. That ultimately had unintended negative consequences for neighborhood stabilization.”

Gordon noted that more refined foreclosure prevention and loss mitigation tools are now available and familiar to local government agencies and mortgage servicers, and at least so far, housing prices have not collapsed, making an extended delay in the foreclosure process unnecessary and unproductive.

“You want the right tool for the job, and stopping the foreclosure process as a whole for every property—especially for vacant properties—is not the right tool,” she said.

Texas-based real estate investor Aaron Amuchastegui said he’s purchased nearly 1,000 vacant houses at foreclosure auction over the past 10 years—and he continues to find zombie foreclosures that have been sitting vacant for months or even years.

“We bought a few houses in March that had actually been vacant and abandoned for two years,” he said, adding that even the borrowers in foreclosure benefit when a zombie foreclosure is eliminated.

“When a borrower abandons a property, they want the foreclosure to end quickly so they can get a fresh start and start rebuilding their credit. … Borrowers aren't trying to save these houses; they want to be done with them.”

Cleveland-based investor Josh Cantwell agreed that a completed foreclosure sale of a vacant property represents a win for distressed homeowners as well as for real estate investors and the local community.

“We do target those properties on Auction.com and other acquisition sources … that would all fall into this zombie category,” he said, explaining that a vacant property often translates into a motivated seller and a quicker turnaround for investors.

Cantwell noted that investors are highly motivated to efficiently rehab vacant properties and get them occupied as soon as possible.

“For an investor to make money … the goal is always occupancy, either by an owner or by a tenant,” he said, adding that he agrees with neighborhood stabilization advocates like Gordon when it comes to giving priority to owner-occupants. “You want to give homeowners that first crack at buying foreclosures, but a lot of them need so much work they are just not appealing, so investors take that role of assuming the risk.”

Demand for vacant foreclosures from real estate investors like Cantwell and Amuchastegui has gotten only stronger since the eviction moratoria put in place by the CARES Act was signed into law on March 27, 2020. More than 80% of Auction.com buyers surveyed in April said their interest in vacant properties had increased or was the same as it was prior to the pandemic declaration and the passage of the CARES Act. 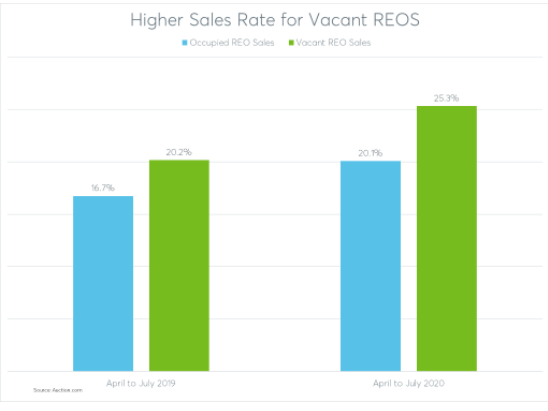 This data demonstrates that demand for both vacant and occupied REOs is increasing compared to a year ago, but demand is rising even faster for vacant REOS than it is for occupied REOs. All buyers of occupied foreclosures and REOs on the Auction.com platform must sign a Community Stabilization Pledge agreeing to adhere to the national eviction moratorium. 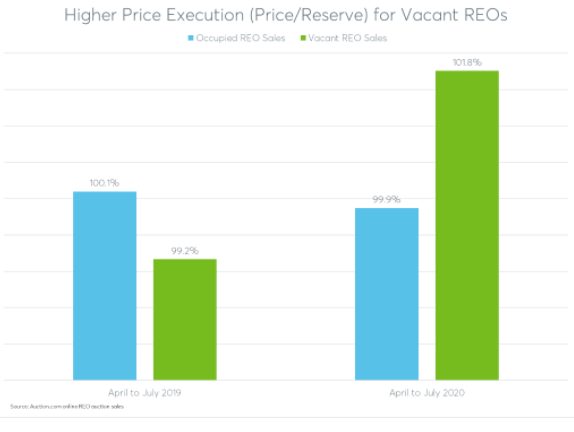