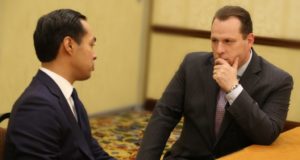 Julián Castro served as Secretary of the U.S. Department of Housing and Urban Development (HUD) during the Obama administration. Now, he's likely to run for President of the United States in 2020, according to an interview published by Rolling Stone recently.

The 44-years-old former Mayor of San Antonio said in the interview that he was "likely to do it."

“I’ll make a final decision after November, but I’m inclined to do it,” he said in the interview. This is a far cry from 2016 when Castro was rumored to be a frontrunner for Vice-President. At that time, when asked by DS News in a February interview if he would consider a higher political position if offered the opportunity, Castro had said, “Oh, I doubt it. . . I fully expect to be back in Texas a year from now.”

At that time, he had also met with Five Star Institute President and CEO Ed Delgado who had asked Castro to consider issuing a mortgagee letter to set the definition and criteria for identifying vacant and abandoned properties and then accelerating those properties to foreclosure.

The problem of so-called “zombie properties,” or those that have been vacated but have not completed the foreclosure process, has become an “issue of national concern,” according to Delgado.

“I have a decent perspective on what you’re talking about because I used to be a city councilman and then the mayor (of San Antonio),” Castro told Delgado. “So we saw it not just from an individual perspective, but from the perspective that concerns neighborhood associations and community associations and folks that have to deal with the impact of vacant houses on their block, and what it does to everyone and not just the individual.”

As Secretary of HUD, Castro had focused his efforts on stabilizing the post-Great Recession market; helping homeowners who lost their properties in Hurricane Sandy, floods, and other natural disasters; and giving public housing residents access to high-speed internet through the ConnectHome program.

During Castro's tenure, HUD also worked with the Department of Justice and 49 state attorneys general to protect homeowners from mortgage fraud during the financial crisis. The result was a $25 billion agreement in 2012 with the country’s five largest lenders, providing relief to millions of homeowners across the country.

Towards the end of his tenure, Castro was also investigated for Hatch Act Violation with an investigative report being sent by the U.S. Office of Special Counsel to President Obama. The House Committee had also asked him to answer their questions about the effect of the changes to HUD’s delinquent loan sales program on taxpayers that included principal reduction and capital arrearage forgiveness, payment shock protection, prohibiting buyers of the loans from abandoning lower-value properties, and alternative bidding for non-profit buyers.

Previous: How are Owners Using Their Home Equity?
Next: Nomura Settles RMBS Suit With DoJ