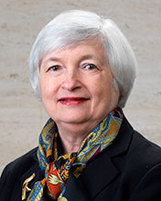 President-Elect Joe Biden has chosen former Federal Reserve Chair Janet Yellen as his Treasury Secretary, several news outlets report, and the Associated Press has confirmed, through an unnamed source. Yellen would be the first woman to head the U.S. Treasury—and that's about seven years after she became the first woman to lead the Fed.

The Associated Press reported that Yellen's nomination is "confirmed by a person who spoke on condition of anonymity to discuss Biden’s plans."

Politico reports that "according to people familiar with the decision, [this] historic move [is] intended to satisfy competing factions within the Democratic Party."

According to CNN, Yellen, should she be accepted by the Senate, would lead Biden's economic response to COVID-19.

The Wall Street Journal, first to report the pending nomination, calls Yellen "an economist at the forefront of policymaking for three decades."

The Associated Press reported earlier that Biden pledged to build a diverse team.

"Yellen enjoys a close working relationship with Jerome Powell, who succeeded her as Fed chair, something that would likely improve coordination between the Fed and the Treasury and perhaps result in additional support for the economy," wrote AP's Christopher Rugaber and Michael Balsamoap and AP Economics Writer Martin Crutsinger.