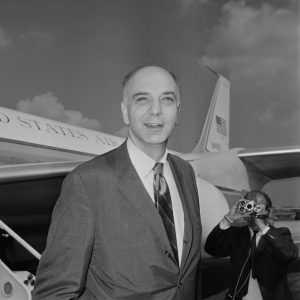 Paul Volcker, the former Chairman of the Federal Reserve who helped subdue inflation in the late 1970s and 1980s died Sunday in New York. He was 92.

The New York Times reported Monday his death was confirmed by his daughter, Janice Zima. Paul Volcker was diagnosed with prostate cancer in 2018.

He served as a senior Fed official from 1975 to 1987 and sought to limit the easing of financial regulation and warned the growth of federal debt threatens the nation’s economic health.

“Paul was as stubborn as he was tall,” said President Jimmy Carter said in a statement on Monday morning, “and although some of his policies as Fed chairman were politically costly, they were the right thing to do. His strong and intelligent guidance helped to curb petroleum-driven inflation, easing a strain on all Americans’ budgets.”

Volcker’s last official post was a chairman of President Barack Obama’s Economic Recovery Advisory Board, which was formed in response to the 2008 financial crisis. He persuaded lawmakers to impose new restrictions on big banks—known as the “Volcker Rule.”

“He came to represent independence,” said former Fed Chairman Ben Bernanke in an interview with The New York Times. “He personified the idea of doing something politically unpopular but economically necessary.”

The Securities and Exchange Commission finalized revisions in October to finalize revisions to simplify compliance requirements relating to the “Volcker rule.”

The Volcker rule generally prohibits banking entities from engaging in proprietary trading or investing in or sponsoring hedge funds or private equity funds.

The changes were developed by the Federal Reserve Board, the Commodity Futures Trading Commission, the Federal Deposit Insurance Corporation, the Office of the Comptroller of the Currency, and the Securities and Exchange Commission.

2019-12-09
Mike Albanese
Previous: Update on Delinquency and Prepayments
Next: The (Empire) State of Mortgage-Backed Securities