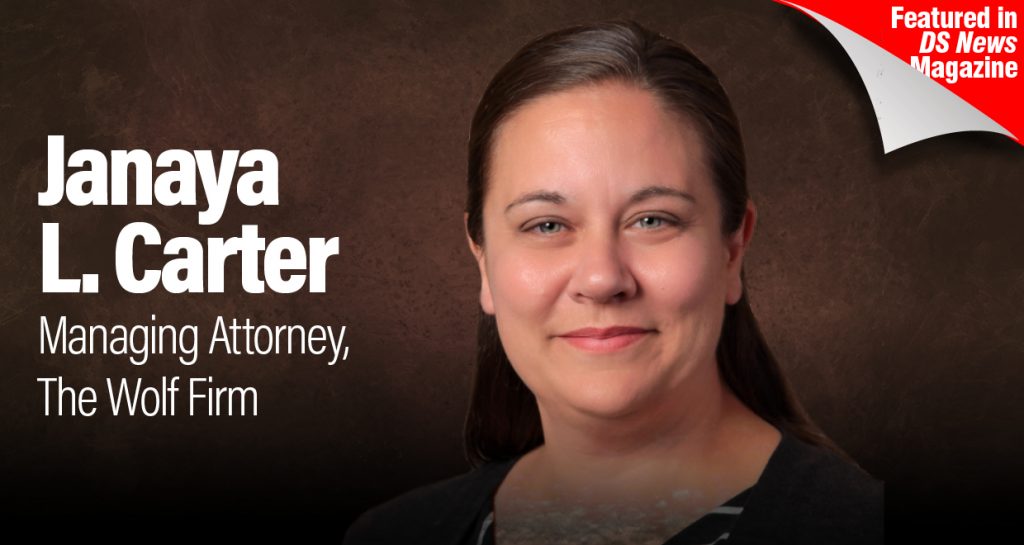 Editor's note: this piece originally appeared in the May edition of DS News.

Prior to joining The Wolf Firm, Janaya L. Carter served as a managing attorney of a prominent mortgage banking law firm based in the Northwest with offices throughout the country. Carter has spent the majority of her 17 years in practice handling residential civil litigation, with particular emphasis on evictions, bankruptcies, non-judicial foreclosures, and judicial foreclosures. Carter has been called upon to speak at a variety of mortgage industry events, including the Legal League 100. She is considered by her peers to be an experienced leader that constantly demonstrates impeccable knowledge of the law, unparalleled litigation expertise, and an ability to execute regardless of the circumstance.

What are the most important trends and challenges facing default servicing and the attorneys working in that space?

Especially in Washington and Oregon, our default rates are extraordinarily low, so the challenge facing firms is maintaining a strong employee base and also possibly diversifying into different areas. During my career, I have seen some traditional servicing functions that servicers handled when I started shifted over to firms such as ours. Managing your team and ensuring you have the proper technology in place to deal with the more administrative functions of handling things like evictions, bankruptcies, and foreclosures is becoming more and more important in our industry, just to offset the added overhead costs.

Washington and Oregon have seen a unique challenge over the past few years in that we've seen a lot of trustee litigation that now has started to come to a resolution, and there were a lot of business expenses associated with defending that. There were some questions about the interpretation of the statute dealing with non-judicial foreclosures. That's resolved to some extent, but that has, in the last few years, been a big challenge. On the Oregon front, the state has traditionally been a non-judicial state, and we saw a large-scale conversion to judicial over a four- or five-year period of time. The influx of that into the court system was a huge challenge. We are now getting back to business as usual, but it took a long time to return to that.

What are some of the other challenges and opportunities a low-volume environment presents?

There was a time when a firm would typically have a paralegal, maybe a legal assistant, and an attorney, and all of those people were providing all of the functions related to a particular case from start to finish. Now, we're having to consider whether we have a solid technology platform and whether we can break some of those functions out from the team that are better served through automation.

Technology is a huge focus in enhancing how efficient we are, in reexamining our processes to ensure they make sense, and in helping to offset some of the increased functions that law firms are having to handle.

Where is the default side of the industry innovating in terms of technological processes?

Oregon and Washington have been very focused on the pre-foreclosure mediation process—getting out in front of the foreclosure and having the borrower involved through that process. In Oregon, there is a portal that is accessible to any party going through the mediation, and any documents that are discussed, any documents that are actually being handled through the mediation process, are made available through that portal. They can see everything that's being uploaded.

That was a focus for the Oregon mediation program so that the borrower had visibility into documents that were being submitted by the servicer. It also has cut down on some of the back-and-forth that borrowers were experiencing when they were going through loss mitigation.

Washington has also made some changes to the state administrative code that requires some of our servicing clients to provide visibility to the borrowers on where they are at in the loss mitigation process. It was done quickly, and I know that some servicers were struggling to figure out how they were going to do that— whether they would need to modify systems that they already had in place. I haven't actually heard from servicers how they're addressing that yet, but I believe there was some difficulty because of the way that passed and came into being, as well as the shortness of time.

With Obduskey v. McCarthy Holthus recently having been settled by the U.S. Supreme Court, are there any other major cases default servicing professionals should be watching closely?

That's a good question. Obduskey is interesting because it talks a lot about the non-judicial process, but, for whatever reason, our western states, although they're non-judicial states, tend to have higher rates of judicial foreclosures. It will be interesting seeing how that plays into things like a judicial foreclosure in the state of Oregon. If you look at the Oregon judicial process, it's more like a non-judicial in the sense that there's not actually a monetary judgment against most borrowers and there's not typically a deficiency judgment against most borrowers. You can only get it in certain circumstances, and it's pretty rare.

As far as the western states, we're pretty quiet. We have already seen massive changes as far as borrower protections. California had the Homeowner Bill of Rights. Washington has the Foreclosure Fairness Act. Oregon rolled out mandatory mediation. It's an opt-out state, so you have to initiate mediation no matter what if you want to foreclose judicially or nonjudicially. Then the borrower decides whether or not they want to participate, but you have to do it. There's some fine-tuning in the legislature, but I don't anticipate anything huge for our states for the time being.

Some people are predicting a recession around the corner, and if that happens, we'll see an influx of requests for loss mitigation. The difficulty, from a firm standpoint and from a servicer standpoint, is that as we've seen default rates fall, you've seen staffing reductions. It’s important to be able to take time and make sure that we're adequately staffed and ready to go, especially from a servicer's perspective, because that was part of the big problem when the last recession hit—they couldn't keep up with the level of loss mitigation requests that they were getting. Staffing is going to be probably the biggest challenge.

The industry is more prepared today than we were when the last recession happened, and that has its advantages and disadvantages. We're certainly more likely to have strong processes in place because of the enhanced auditing that we've gone through over the last few years. Some of the changes that have happened in the industry have actually been beneficial and could better prepare us for the next recession.

The new mortgagee letter reverses the Administration's current policy that says loans in forbearance are not eligible for insurance.