Home / Daily Dose / Getting Out of the Game: Many Borrowers are Exiting HARP

Getting Out of the Game: Many Borrowers are Exiting HARP

Approximately 3.4 million homeowners have received mortgage modifications through the government’s Home Affordable Refinance Program (HARP) since the program’s inception in 2009.

Now that many of those homeowners have built up sufficient equity and mortgage rates are low, however, many HARP refinancers are leaving the program behind in favor of more conventional mortgage modifications, according to Freddie Mac’s January 2016 Insights & Outlook report released on Friday. Aggregate home equity in the United States has grown by $6 trillion since the middle of 2011.

As part of a trend Freddie Mac has dubbed “unHARPing,” an estimated 10 percent of the 3.4 million HARP borrowers have refinanced into a non-HARP loan. Many of the borrowers who refinanced through HARP from 2009 to 2012 likely have a mortgage rate of higher than 5 percent, and many of them have taken advantage of the low mortgage rates. Since there are more than 2 million current active HARP loans in the United States, there remains significant potential for those borrowers to refinance using a conventional loan. 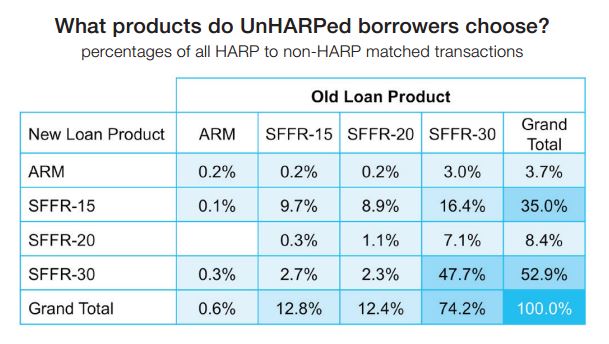 “The HARP program allowed millions of underwater borrowers with good payment history to refinance without paying down the balance of their current mortgage,” Freddie Mac Chief Economist Sean Becketti said. “Many borrowers who took advantage of HARP over the past five years now have built sufficient equity so they can UnHARP to a conventional refinance with little or no cash brought to closing. This is yet another indicator of the effectiveness of the HARP program. And yet there remains many thousands more who can still take advantage of the HARP program that are currently underwater on their mortgage that should be utilizing this highly successful program.”

Some trends among borrowers who have “unHARPed,” according to Freddie Mac:

HARP was launched in March 2009 in response to the housing crisis as a way for underwater borrowers with good payment records and little or no equity to refinance their mortgages and lower their monthly payments. While originally scheduled to last one year, the program has since been extended several times and is now scheduled to expire at the end of 2016. FHFA Director Mel Watt has stated that the program will not be extended beyond the end of this year.