The final $1 billion in funds under the Hardest Hit Fund (HHF) has been allocated to 13 of the 19 participating HHF states, according to an announcement from the U.S. Department of Treasury on Tuesday.

The states that received this round of funding qualified to receive the funds through a competitive application process in which state housing finance agencies (HFAs) were required to demonstrate an ongoing need for more funding to prevent foreclosures and stabilize housing markets. The HFAs were also required to submit a plan of action to address their ongoing needs by utilizing the funding by the end of 2020.

“Today’s announcement continues Treasury’s commitment to provide relief to struggling homeowners and help stabilize neighborhoods in hard hit areas,” said Mark McArdle, Treasury Deputy Assistant Secretary for Financial Stability. “While the housing market continues to recover we know some homeowners and areas are still experiencing the damaging effects of the housing crisis. With this additional funding, states will be equipped to continue their great work in getting critical resources to those most in need.”

The HHF allocation announced on Tuesday is the second phase of the $2 billion in additional HHF funding Congress authorized under the Consolidated Appropriations Act of 2016. In the first phase, $1 billion was allocated to 18 of the 19 participating HHF states according to a state’s population and according to how states have utilized their HHF funds. The first phase was announced on February 19.

All participating HFAs were eligible to apply for the second phase of funding. Applicants were allowed to request up to 50 percent of their existing HHF allocation of $250 million, whichever was lower.

The $2 billion in additional funding for HHF under the Consolidated Appropriations Act is the fifth round of HHF funding altogether. The Hardest Hit Fund was created in 2010 under the Troubled Asset Relief Program (TARP) to provide $7.6 billion in targeted aid to 18 states and the District of Columbia which were deemed to have been hit hardest by the financial crisis. The total HHF allocation is now $9.6 billion, and the program and assisted almost a quarter of a million homeowners removing more than 9,00 blighted properties. Click here to access the Treasury HHF page for more information. 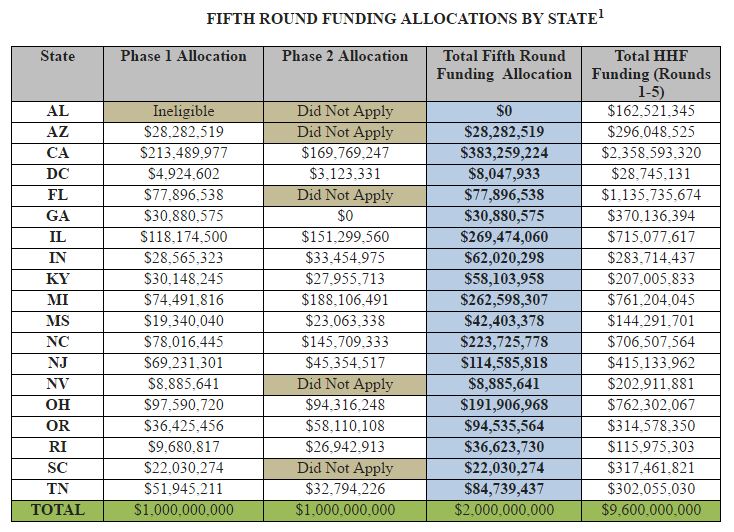 Previous: Back to Basics: 4 Ways to Transform the GSEs
Next: NAR Calls for Further FHA Insurance Premium Reductions