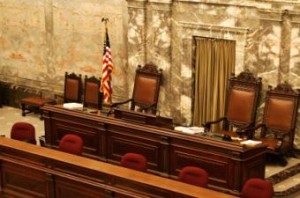 On Thursday, the House of Representatives passed a landmark bill--233 to 186--that, in its current form would dramatically change the future of financial regulation. The Financial CHOICE Act, originally introduced by Representative Jeb Hensarling (R-Texas), Chairman of the House Financial Service Committee, on April 26, 2017, significantly amends the 2010 Dodd-Frank Wall Street Reform and Consumer Protection Act.

In mid-April, Republicans introduced the bill, arguing that Dodd-Frank and the subsequent regulation that ensued harms economic growth and ultimately, the American consumer. According to the proposal, Dodd-Frank’s particular brand of regulatory complexity and government micromanagement made basic financial services less accessible to small businesses and lower-income Americans.

The CHOICE Act is the Republican response to reforms put in place after the 2008 economic collapse. Critics of Dodd-Frank have long argued that the law is too restrictive for financial institutions, driving up the cost of compliance, a cost that is ultimately born by the public. Republicans insist that the CHOICE Act offers financial institutions of all sizes a “Dodd-Frank off-ramp,” which, is an avenue to freedom from an overly burdensome and highly intrusive regulatory regime in exchange for the institutions maintaining significantly larger capital reserves than currently required.

"Yes, there are a couple of particular things where we could tighten it up, but the assault on the major set of plans is greatly mistaken," former Rep. Barney Frank, D-Mass., said recently on Squawk Box Asia. “Any comprehensive legislation needs some changes. If the Republicans hadn't taken over the House in 2011, with an avowed purpose to get rid of the whole thing, we would have made the changes."

The bill’s sponsors say the intent of the bill is to create hope and opportunity for investors, consumers, and entrepreneurs by holding Washington and Wall Street accountable, eliminating red tape to increase access to capital and credit.

“Supporters of Dodd-Frank promised it would lift the economy, end bailouts, and protect consumers,” Hensarling said in April. “Yet Americans have suffered through the worst recovery in 70 years, Dodd-Frank guarantees future bailouts for Wall Street, and consumers are paying more and have fewer choices. Dodd-Frank failed to keep its promises to the American people, but we will work with President Trump to follow through on his promise to dismantle Dodd-Frank. That’s not what Wall Street wants, but it is what hardworking Americans need to have a healthier economy with more opportunities so they can achieve financial independence.”

Congresswoman Maxine Waters, Ranking Member of the House Committee on Financial Services, quipped that she calls the act the “Wrong Choice Act” because it would be extremely harmful for hardworking Americans across the country.

“Let’s first talk about why we passed Wall Street reform and created the Consumer Bureau in the first place,” Waters said. “Remember the financial crisis? At the core of it, there was an epidemic of irresponsible and malfeasant behavior by financial institutions. Under-regulated predatory lenders peddled and pushed toxic subprime loans to unsuspecting borrowers. Then Wall Street packaged those loans into securities, paid credit rating agencies to rate them AAA, and made bets that they would fail. When they imploded, it sent the economy tumbling into the Great Recession.”

Waters went on to say the Democrats took action to ensure that this sort of abusive behavior could never happen again by passing Dodd-Frank and creating the CFPB and the passage of the CHOICE Act would lead the country down the road to another financial crisis.

“Although financial services reform was necessary in the wake of the crisis, the passage of Dodd-Frank represented an overcorrection that ushered in an overly burdensome and unnecessarily complicated regulatory scheme for the mortgage industry,” said Five Star Institute President & CEO Ed Delgado. “Now nearly a decade later, the industry has partnered with government stakeholders and adapted to the new climate at great cost. I urge congress to be mindful of the business reality and enact any common sense financial reform in an incremental fashion to ensure continuity for the American Consumer.”