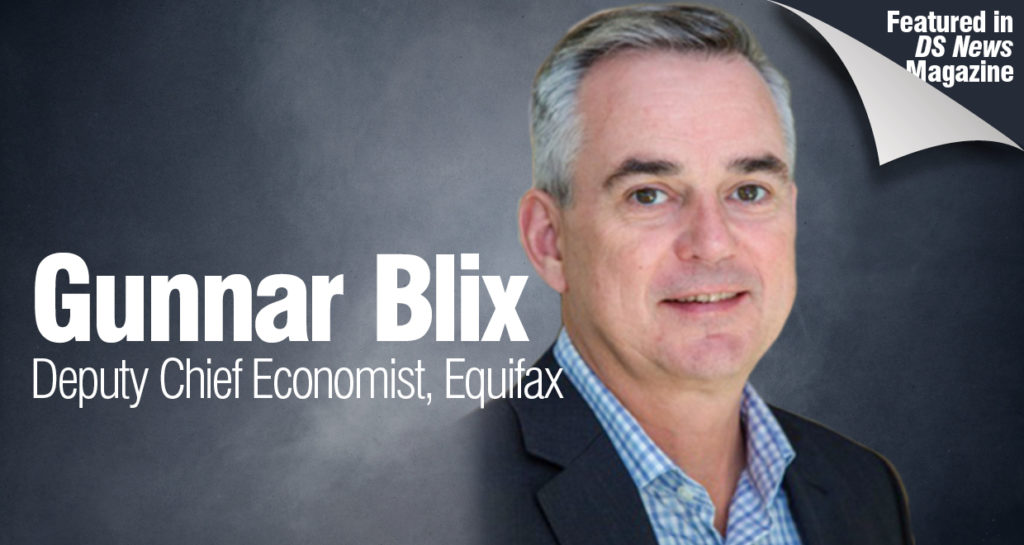 Editor's note: This story originally appeared in the June issue of DS News.

Gunnar Blix spends his day analyzing consumer credit trends and the consumer economy, focused on the auto, banking, and mortgage verticals. Before assuming his role at Equifax, Blix led customer analytics for the company’s mortgage vertical and provided analytic support for capital markets. Before joining Equifax, Blix had extensive experience in property and mortgage analytics; creating models for lead generation, attrition, and scoring in many verticals including banking, auto, insurance, telecommunications, and travel industries.  He studied data science and machine learning at the University of Illinois and holds an M.S. degree in computer science from the Norwegian University of Science and Technology.

DS // What does your day-to-day role look like as Deputy Chief Economist?

I work closely with our Chief Economist, Amy Crews Cutts, and our daily activities involve collaborations with other people across the company, whether it's in supporting roles for sales or on the front lines with external relations. Mortgage is our largest vertical. That covers credit, income, and employment verification, as well as property and collateral analytics.

While Equifax is a business-to-business company, our main mission is to enable the consumer to get necessary credit to manage their finances. On a daily basis, we analyze consumer credit—where consumers might be seeing signs of stress and where there might be opportunities—and then help our lender clients understand how they can best meet the needs of their consumers, without taking on unnecessary risk or causing further stress for the consumer.

We also work closely with marketing and public relations to share insights with clients, the media, consumers, and other industry stakeholders, such as regulators. For that purpose, we produce monthly reports, quarterly webinars, and also support our verticals in reaching out to clients, agencies, and regulators to advocate for industry best practices. Lastly, we distill economic news and forecasts from many other industry sources for our leadership and our finance department.

DS // What is the most rewarding aspect of these tasks?

When I started with Equifax, I worked in analytics roles that were revenue-driven; first, focused on helping capital markets clients analyze pre-payment and default rates on mortgage-backed securities, then expanding to broader client-driven mortgage analytics. The most rewarding aspect of my current role is that we are insights-driven, and that means we can take the time to explore a topic that we may believe is important to the consumer, or the industry, and then dig in to try to understand the underlying market dynamics.

Recently, that involved going back and taking a look at the impacts of Hurricane Sandy to assess what effects we might see from Hurricanes Harvey, Irma, and Maria in the medium- to long-term future.

DS // That’s fascinating, what have you uncovered?

We saw that even though there was early mortgage distress, borrowers went out and found solutions to stay in their homes—such as living in a second floor while they were renovating the first floor. Eventually, homeowners tended to get up-to-date on their mortgage. On the auto side, we'd see rapid replacement of autos, much of which was insured. We take this to mean that while there was a lot of distress in the Harvey, and Irma, and Maria markets, much of that will resolve with a little bit of time.

Surprisingly, we also saw that some of the things that the GSEs were doing around modifications and forbearances had an indirect negative impact because the credit scoring models did not distinguish that the interventions were not consumer-driven, but were disaster-driven. And so, it shouldn't come back to hurt the consumer.

DS // Continuing our conversation about consumers—you mentioned that examining credit trends among homebuyers has been a focus for you. What have you learned?

We see a lot of positive trends right now, including mortgage delinquencies that have come down to the lowest levels we've seen in years, write-offs becoming fewer and far between, and consumers benefiting from mortgages locked in at low-interest rates.

However, there are some troubling trends as well that require vigilance. We've seen prices rising in part due to tight inventories, particularly in that entry-level segment for new homeowners that are causing consumers to take on higher debt-to-income ratios. We are also seeing rising interest rates that'll come into play. In 2017 we saw a decrease in first mortgages, which we think was largely because it was the year that we finally saw the long-anticipated rise in interest rates and this slowed down the refinance side. However, this also opens up opportunities on the HELOC and second mortgage side.

HELOC originations have been on a steady rise since 2011, but with much tighter underwriting and much less generous terms than we used to see before The Great Recession. Many lenders have eliminated or shortened the interest-only periods, and insist on fully amortizing payments from the first draw. This reduces the risk of the payment shocks that we saw over the last four years. While subprime HELOCs are also on the rise, they still only make up less than 1-1/2 percent of the overall HELOC origination dollars, so it's a small segment.

DS // Speaking of subprime, how has this market evolved over the last few years?

The subprime heyday that we saw before The Great Recession hasn't come back, and that's reassuring regarding the stability of the housing market. But on the other hand, it also means that there are otherwise credit-worthy borrowers that get shut out of homeownership. In 2017, 9 out of 10 mortgage borrowers who originated a new mortgage had a Vantage credit score 3.0 of 638 or above, which is well into the prime territory. In contrast, back in 2005, one in 10 of the new loans had a borrower credit score below 585. So we've seen the threshold for subprime borrowers to get into homeownership go up quite a bit, and that's something we would like to see a change in a responsible manner.