The U.S. Department of Housing and Urban Development (HUD) announced Tuesday that Brian Montgomery has been nominated to serve as Deputy Secretary of HUD.

Montgomery, who also serves as HUD’s Assistant Secretary for Housing and Federal Housing Commissioner, would manage the day-to-day operations of the agency and assist the Secretary in leading the department’s nearly 8,000 employees.

“Once again, I am tremendously honored to be called upon by President Trump and Secretary Carson to serve this Department and the American people,” Montgomery said. “Service to our fellow Americans is the cornerstone of our Department and I look forward to continuing to help fulfill HUD's critical role."

A release from HUD states that Montgomery was nominated for these roles in September 2017 and he is the first person to serve as the head of the Federal Housing Administration twice and under three different Administrations. 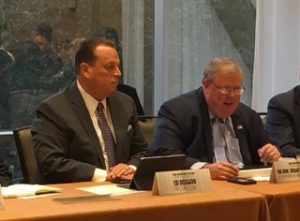 “Brian brings tremendous experience to our team and has been a strong voice in the effort to reform the Nation's housing finance system,” said HUD Secretary Dr. Benjamin Carson. “As Federal Housing Commissioner, Brian made certain FHA remains a stable and reliable resource for first-time and minority homebuyers, and other underserved borrowers while protecting the interests of taxpayers. Brian is a key member of our team and I look forward to having him confirmed as our Deputy Secretary.”

"We applaud the public service Mr. Montgomery has extended to the cause of promoting homeownership, and this is the next and right step to advancing the mission of HUD."—Ed Delgado, President & CEO, Five Star Global

“The Manufactured Housing Institute applauds the nomination of Brian Montgomery for Deputy Secretary of HUD. His leadership and vision during two tours at HUD demonstrates his commitment to solving our nation’s affordable housing supply challenges through solutions that support innovative housing methods,” said Lesli Gooch, EVP, Government Affairs for the Manufactured Housing Institute.

John Smaby, President of the National Association of Realtors, said Montgomery has demonstrated "consistent support for American consumers," while capitalizing on the role the FHA plays in addressing affordability and facilitating homeowbership in the U.S.

“His vision of modernizing the critical infrastructure of the FHA is essential to successfully serving all Americans with affordable and responsible mortgage financing while protecting both borrowers and taxpayers from avoidable risk," said David M. Dworkin, President and CEO of National Housing Conference. "He will be a valuable voice within the administration and in the housing community as a whole.”

Montgomery served in the Executive Office of the President as Deputy Assistant to the President and Cabinet Secretary from January 2003 until April 2005. He led the White House's internal working group to monitor all facets of the Space Shuttle Columbia accident investigation, which he was awarded the NASA Exceptional Service Medal.

He served as Deputy Assistant to the President and Director of Advance from January 2001 until January 2003.

For more on Montgomery, read our interview in the November 2018 edition of DS News magazine.

Previous: When Hope Survives
Next: David Lowman Stepping Down From Freddie Mac