Here’s How President-Elect Biden Could Reshape the Housing Market 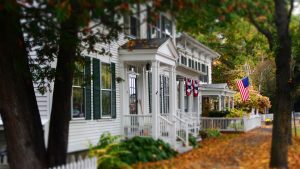 Major news outlets announced on Saturday that former Vice President Joe Biden is the president-elect. A Biden administration may bring major policy changes with it.

According to an analysis from realtor.com, Joe Biden would be entering the presidency during a unique time in the housing market, as the industry is experiencing a shortage of home inventory, record-low interest rates, and high home prices. There is no doubt that this housing market environment has made it challenging for middle- and low-income Americans to purchase a home, and entry-level housing has become extremely competitive.

During his run for the presidency, Biden’s campaign released a $640 billion housing plan. This plan includes assisting first-time homebuyers by providing them with  “a down payment tax credit of up to $15,000,” which they could apply at the time of purchasing a home.

“Biden recognizes how challenging it can be for some people to become homeowners," Hale said. She predicts that a Biden administration would focus housing initiatives on policies that would help those who have struggled to attain homeownership in the past.

Some Americans who could become eligible for lower home prices, as well as assistance with down payments, are “teachers, first responders, and other public and national service workers.” This kind of assistance might have limitations, however. These categories of potential home buyers might only receive this assistance if they were looking to purchase a home in a low-income neighborhood or a neighborhood that is more expensive and offers little affordable housing opportunities.

Another major concern that has been discussed during Joe Biden’s run for the presidency is the issue of racial equity and discrimination. Former Vice President Biden has discussed his intentions to help bridge the racial housing gap, and homeownership is a key way in which racial and ethnic minorities could help build generational wealth and a brighter future.

Biden has proposed in the past that there should be “a national standard for appraising homes,” which would ensure that home values in communities of color would not “be assessed for less than similar homes in comparable white neighborhoods.”

In addition to helping homeowners, the president-elect has also voiced his intent to assist struggling renters. It is possible that under a Biden administration, low-income renters could receive a tax credit which would enable them to just pay up to 30% of their total income on housing.

In the wake of COVID-19, it is also likely that the president-elect would the eviction moratorium put in place by the Trump administration.

President-elect Biden has also “pledged to increase the housing supply by putting $100 billion toward constructing and upgrading affordable housing,” which would help bring relief to a struggling entry-level housing market.