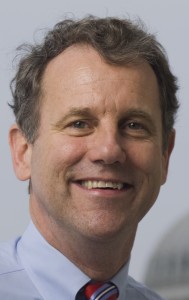 U.S. Senator Sherrod Brown (D-Ohio) recently exhorted the heads of three government regulatory agencies (the Federal Reserve, OCC, and FDIC) to protect the rules that require the largest financial institutions to hold more capital, thus limiting the same risk-taking the led to the financial crisis of seven years ago, according to an announcement on Brown’s website.

Brown wrote a letter urging Fed Chairman Janet Yellen, FDIC Chairman Martin Gruenberg, and Comptroller of the Currency Thomas Curry to resist the clamoring of Wall Street banks to weaken those minimum capital requirement rules, which Brown believes would expose taxpayers to more bailouts similar to those that occurred in 2008.

In the letter, Brown stressed the importance of the rules required by the Wall Street Reform Act including the enhanced supplementary leverage ratio (SLR) for the largest financial institutions and the margin rules for derivatives transactions.

“I write out of concern with the arguments made by large Wall Street banks and their allies that these rules—particularly the treatment of margin for cleared derivatives and rules governing trades among affiliates—should be watered down,” Brown wrote in his letter. “I urge you to reject these calls and maintain adequate taxpayer protections.”

The margin rules for derivatives transactions were finalized by regulators in October in order to prevent risky trading by financial institutions that precipitated the financial crisis in 2008. The Fed, OCC, and FDIC approved a final SLR of 6 percent for the largest federally insured depository institutions in April 2014. The 6 percent SLR requires large banks to increase the amount of capital they use to fund all of the assets on their books instead of just the risky assets.

“I urge you to reject these calls and maintain adequate taxpayer protections.”

“Enhancing capital and limiting leverage at the largest financial firms will help ensure that risky, complex, opaque financial transactions never again threaten the entire U.S. financial system and broader economy,” Brown wrote. “As we have seen repeatedly, better capitalized firms are in a stronger—not weaker—position to continue lending and take on risk throughout the credit cycle, including stepping in to assume others’ positions.”

Click here to read the complete text of Brown's letter.

Previous: HARP Refi Numbers Dwindling Despite FHFA’s Efforts
Next: Freddie Mac: ‘Vast Majority’ of Housing Markets Still Trying to Get Back to ‘Normal’