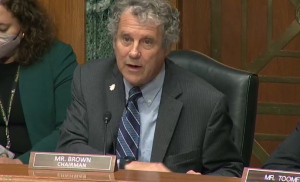 Sen. Sherrod Brown, Chairman of the U.S. Senate Committee on Banking, Housing, and Urban Affairs, addresses a Capitol Hill hearing titled “Priced Out: The State of Housing in America”

The U.S. Senate Committee on Banking, Housing, and Urban Affairs recently held a hearing titled “Priced Out: The State of Housing in America.”

With affordability as a major hurdle for many in achieving the American dream of homeownership, Committee Chairman Sen. Sherrod Brown and Ranking Member Sen. Patrick J. Toomey hosted a panel of industry experts to discuss challenges in the market and propose plans to create new housing opportunities across the country.

“We can’t deny this problem any longer—we see it in every community across the country,” said Sen. Brown in his opening comments. “It’s not a Republican or Democratic problem. Congress must act.”

Delivering testimony on behalf of NAR, Dr. Yun serves the association as Chief Economist, and oversees the Research Group at NAR. He supervises and is responsible for a range of research activity for NAR, including the association’s Existing-Home Sales Report, Affordability Index, and Home Buyers and Sellers Profile Report. In his role with NAR, Dr. Yun creates the association’s forecasts, and participates in many economic forecasting panels. He appears regularly on financial news outlets, is a frequent speaker at real estate conferences throughout the nation, and has testified before Congress. Dr. Yun has also appeared as a guest on CSPAN’s Washington Journal.

Before founding AAF in 2009, Dr. Holtz-Eakin served in a variety of influential policy positions. During 2001-2002, he was the Chief Economist of the President’s Council of Economic Advisers (CEA), where he had also served during 1989-1990 as a Senior Staff Economist. At CEA, he helped to formulate policies addressing the 2000-2001 recession, and the aftermath of the terrorist attacks of September 11, 2001. From 2003-2005 he was the sixth Director of the non-partisan Congressional Budget Office (CBO), which provides budgetary and policy analysis to the U.S. Congress. During his tenure, CBO assisted Congress as they addressed numerous policies—notably the 2003 tax cuts (the Jobs and Growth Tax Relief Reconciliation Act), the 2003 Medicare prescription drug bill (the Medicare Modernization Act), and the 2005 push for Social Security reform. During 2007 and 2008, Dr. Holtz-Eakin was Director of Domestic and Economic Policy for the John McCain presidential campaign. After that, he was a Commissioner on the congressionally-chartered Financial Crisis Inquiry Commission.

As VP of Housing Policy at the Center on Budget and Policy Priorities, Bailey oversees the Center’s work to protect and expand access to affordable housing for people with low incomes. Prior to becoming VP for Housing Policy, Bailey served as the Director of “Connect the Dots: Bridging Systems for Better Health,” a Center initiative that identifies opportunities to strengthen the link between housing programs and health policy. Prior to joining the Center in January 2016, Bailey served as Director of Health Systems Integration for the Corporation for Supportive Housing, where she focused on finding sustainable funding sources for the services that people with histories of homelessness and chronic health conditions need to maintain their housing. In addition, she worked with health care partners to improve their understanding of the housing sector and to identify ways they could make appropriate investments in rental assistance and capital projects. This included working with states to expand Medicaid coverage for housing-related services for highly vulnerable populations and helping the housing sector strategically build partnerships with health-sector stakeholders. She also worked for the National Alliance to End Homelessness, the Association of Maternal and Child Health Programs, and the City of Rockwall, Texas.

“Recent cost increases have priced an estimated four million families out of homeownership. Those are families who will now be renting, in a rental market that was already too tight,” cited Sen. Brown. “In May, median rents topped $2,000 a month. And that’s if you can find somewhere to live at all.”

The hearing was held as the nation confronts a six-million-unit housing shortfall. This decades-in-the-making phenomenon has helped sustain year-over-year price growth for a record 124 consecutive months, according to NAR.

“When the Federal Reserve essentially went all-in in the early months of the pandemic … the decline in mortgage rates and the cautious reopening of the economy boosted housing demand,” said Dr. Yun in his testimony. “The housing market always responds to changes in mortgage rates.”

Interest rates, which have been hovering in the 5.5% range, have been forcing more to the sidelines and re-consider their housing options, inevitably pricing many out of the market.

“At the same time, interest rate increases, price increases, and lack of supply have created an affordability crunch,” added Dr. Yun. “While inventory has grown nominally since the early part of 2022, interest rates have increased about 2.5 percentage points, adding about $800 per month to a median-priced house payment. Our research also indicates that a buyer would need an income of about $125,000 to afford most of the homes on the market. This affordability crunch is felt most acutely as we move down the income scale and by minority households given the current income distribution in America.”

And while intentions of the Federal Reserve are to cool the market, while curbing inflation, Dr. Holtz-Eakin noted the ripple effect that the Fed’s actions have on the housing marketplace, thus pushing prospective homebuyers further away from their goal.

“The Fed’s plan cannot avoid affecting housing especially strongly. As the Fed raises the federal funds rate, all interest rates will rise,” said Dr. Holtz-Eakin in his testimony. “Credit cards and auto loans will go up, and so will mortgage interest rates. Indeed, mortgage rates have already risen sharply. But there is a second channel of impact. As noted above, the Fed purchased $30 billion monthly in MBS. As part of tightening financial conditions, this will no longer occur. That means to get the same total amount of funds into the mortgage market, rates will have to rise even further to attract the $30 billion in capital. But it doesn’t end there. The Fed intends to draw down its holdings of MBS by $35 billion a month, essentially pulling $35 billion in capital out of the market. The upshot is that rates would need to rise even a bit more to completely offset the $65 billion (roughly 20% of mortgage funds at 2021 rates) net swing in mortgage funds.”

Bailey took the stand and discussed the ever-widening homeownership gap and wealth inequality.

“People of color are also more likely to face housing hardship, instability, and homelessness,” said Bailey. “More than 60% of people in low-income households that pay more than half their incomes for housing are people of color. These renters are more likely than white renters to live in crowded conditions. Asian and Pacific Islander and Latino renters face the highest levels of doubling up and overcrowding, with one in 10 living in households that are both doubled up and overcrowded. And people of color are at much greater risk of experiencing homelessness. Nearly 40% of those who experienced homelessness in 2020 were Black, and 23% were Latino, far above these groups’ shares of the U.S. population (13 and 18%, respectively). Native Hawaiians and Pacific Islanders have the highest rate of homelessness, followed by American Indians and Alaska Natives.”

In terms of solutions to combat the housing inequality issue, Bailey discussed the crucial role of rental assistance programs in closing the affordable housing gap to prevent housing instability, including homelessness, evictions, and overcrowding.

“Rental assistance is by far the most direct, effective way to address the nation’s most severe housing problems,” added Bailey. “Research shows that vouchers sharply reduce homelessness, overcrowding, and housing instability. And because stable housing is crucial to many other aspects of a family’s life, those same studies show numerous additional benefits to vouchers. Children in families with vouchers are less likely to be placed in foster care, switch schools less frequently, experience fewer sleep disruptions and behavioral problems, and are likelier to exhibit positive social behaviors, such as offering to help others or treating younger children kindly.”

Dr. Holtz-Eakin cited further Congressional measures to alleviate some of short-term stresses on the housing market, mostly actions that could boost builder confidence. The National Association of Home Builders (NAHB) recently reported that inflation combined with high rates is dampening market confidence for newly-built single-family homes, which posted a seventh consecutive month of declines in July 2022.

“Congress could take steps to reduce tariffs that raise the prices of key construction materials, most obviously those on Canadian lumber,” said Dr. Holtz-Eakin in his testimony. “Congress can investigate the labor market forces leading to an estimated shortfall of 650,000 skilled construction workers in 2022. Finally, Congress can work to reduce the red tape requirements of new construction, ranging from the building permit process to unwanted land-use restrictions.”

Also cited as a solution by Dr. Holtz-Eakin was GSE reform.

“Outside of short-term fixes, the most effective action Congress can take to improve the overall health of the housing market is to continue the effort to reform the GSEs,” added Dr. Holtz-Eakin. “The United States does not have a functioning private secondary mortgage market, and has a distorted primary market thanks to Fannie and Freddie. If Congress seeks a healthy and functioning housing market that benefits all participants, including seniors, then it must continue its efforts to reform the GSEs.”

Previous: As Prices Rise, Homes Staying on the Market Longer
Next: Rep. Hill Calls for Increased GSE Oversight From FHFA