Delinquencies on prime jumbo loans continue to climb, and ""Fitch Ratings"":http://www.fitchratings.com says they could reach 10 percent as early as next month.

According to Fitch's data, overall, prime jumbo RMBS at least 60 days past due swelled to 9.6 percent in January, up from 9.2 percent in December 2009. The prime sector of the jumbo market was the only one in which new delinquencies increased from a year ago, Fitch said.

Although prime jumbo delinquencies began to rise in the second quarter of 2007, the company says they accelerated in 2009 nearly tripling over the course of the year. Fitch notes that delinquency rates on pre-2005 loans remain well below that of more recent originations.

Florida saw the biggest monthly jump of these states. It holds only 6 percent of the market share, but now has the highest serious delinquency rate at 16.6 percent, according to FitchÃ¢â‚¬â„¢s analysis.

Prime jumbo RMBS 60-plus days delinquencies for all five states at January 2010 compared to December 2009, and their approximate share of the market, are as follows:

A separate study from ""MDA DataQuick"":http://www.dataquick.com says that the million-dollar jumbo loan home is becoming hard to sell in the Golden State. The number of California homes that sold for $1 million or more declined for the fourth consecutive year in 2009, the company said. The 18,621 Golden State homes that sold for seven figures last year was the lowest count since 2002. 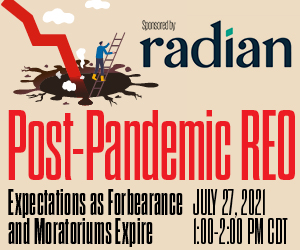 A new DS News webinar will examine the predicted flood in federal evictions and foreclosures following the end of moratoria, and how the industry will pivot to handle the volume that it will bring.