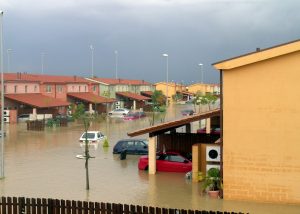 The study, published in the journal Proceedings of the National Academy of Sciences, estimated that nearly $75 billion of the $199 billion in flood damages that occurred between 1988 and 2017 was the result of dramatic changes to the global climate. The Stanford researchers used climate and socioeconomic data for their study to determine if the increase in flooding was being driven primarily by climate change or by other ground-level factors including population growth, housing development, and increasing property values.

The research team concluded that changes in precipitation accounted for 36% of the actual flooding costs that occurred during the three-decade period measured in their study, which also developed an economic model based on precipitation and flood damage reports. The study also created a model to calculate what the potential economic impacts that could have transpired if extreme precipitation changes never occurred.

“What we find is that, even in states where the long-term mean precipitation hasn’t changed, in most cases the wettest events have intensified, increasing the financial damages relative to what would have occurred without the changes in precipitation,” said Davenport.

“Accurately and comprehensively tallying the past and future costs of climate change is key to making good policy decisions,” said Burke. “This work shows that past climate change has already cost the U.S. economy billions of dollars, just due to flood damages alone.” Added Marshall Burke, an associate professor of Earth system science and the study’s co-author.