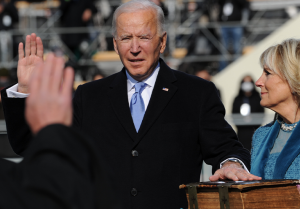 The arrival of Joe Biden and Kamala Harris as the nation’s new president and vice president was met with enthusiasm and optimism by the leaders of the nation’s major trade associations serving the mortgage, housing and financial services industries.

Robert D. Broeksmit, President & CEO of the Mortgage Bankers Association, offered his congratulations and stated an eagerness to work with the new administration.

“The housing market has been a bright spot in the uneven economic recovery from the COVID-19 pandemic,” said Broeksmit. “Our immediate focus must be to continue to assist homeowners, renters, and landlords negatively affected by the pandemic. Improving access to affordable housing, creating opportunities for first-time and minority households, and ensuring liquidity will also be among our top priorities. MBA and its members are ready to partner with the Biden administration as it builds its team of economic, housing, and financial services experts.”

Charlie Oppler, President of the National Association of Realtors (NAR), stated that he was “heartened by President Biden’s call for unity. As Americans, we will see leaders come and go during our lives, but our nation succeeds only when we unite. NAR is committed to assisting President Biden and the new Congress as we seek to heal our nation and strengthen the economy, continuing our 113-year tradition of working with every Congress and Presidential administration.”

We look forward to partnering on many of our common goals, including policies that will advance and expand the American Dream of homeownership, address housing affordability and accessibility, and promote fair housing and racial equity.”

Rob Nichols, President and CEO of the American Bankers Association, also highlighted Biden’s call for unity in his inaugural speech.

“We urge our elected leaders in both parties to come together to confront the country's challenges, starting with the COVID-19 pandemic and the significant economic damage it's caused,” he said. “Whether it's helping a struggling small business with a PPP loan, delivering an economic impact payment to a single parent trying to make ends meet or assisting families with their mortgages during these hard times, banks of all sizes will continue to support their customers, clients and communities. We look forward to working with the new administration and the new Congress to lift the economy further so every American has the chance to thrive.”

Chuck Fowke, Chairman of the National Association of Home Builders, offered his congratulations and commended the Biden proposal for a homebuyer tax credit.

“We stand ready to partner with the new administration to ensure that creditworthy home buyers and small businesses can get mortgages and loans, enact comprehensive housing finance reform that protects the 30-year, fixed-rate mortgage, and improve the Low-Income Housing Tax Credit,” Fowke said. “These pro-housing policies will provide more homeownership and rental housing opportunities for all Americans and boost economic growth.”

Jeff Berger, CEO of the National Association of Gay and Lesbian Real Estate Professionals (NAGLREP), expressed optimism that Biden would carry through on his campaign promises to ensure protection of LGBT rights, including in the fight against housing discrimination.

“Since 2011, NAGLREP is a stakeholder at HUD and we look forward to working together to better LGBT fair housing,” he said. “We've also been advocating for the Equality Act and hope under the new administration the Equality Act is passed.”

The Consumer Bankers Association (CBA) tweeted its congratulations to the new Executive Branch leaders, adding that it “looks forward to working with the Administration in continuing the economic recovery from the effects of #COVID19 & how banks can continue helping families & #SmallBiz achieve their dreams.” However, CBA President Richard Hunt may have offered the industry’s first word of concern regarding the new administration with the decision to replace Kathleen L. Kraninger as Director of the Consumer Financial Protection Bureau before the 2023 expiration of her five-year term.

“The CFPB—as originally envisioned by Congressional leaders and Senator (Elizabeth) Warren—should be an independent agency, free of presidential politics and an advocate for consumers, which requires a consistent, sustainable set of rules allowing all financial institutions to operate on a level playing field in a modern marketplace,” said Hunt in a statement. “While the Supreme Court ruled the president could replace the bureau’s director ‘at will,’ it did not mandate such, and CBA does not believe it is in the best interest of consumers to have a new director with each change in administration. This whip saw effect will stifle innovation and prevent consistent regulations.”