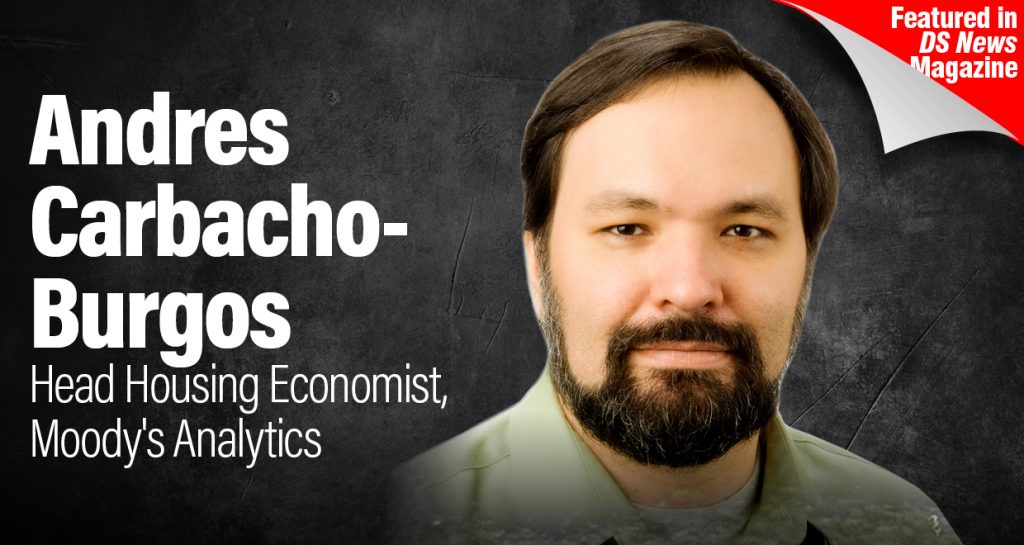 Editor’s note: This piece originally appeared in the May issue of DS News.

Andres Carbacho-Burgos analyzes the U.S. housing market, U.S. residential construction, the Canada housing market, and U.S. regional economies. Before joining Moody's Analytics, he taught economics at Texas State University, where he also researched open-economy macroeconomics and income inequality. Originally born in Chile, he obtained his Ph.D. and Masters in economics from the University of Massachusetts at Amherst and his B.A. in economics from Carleton College.

In your webinar titled “U.S. Housing Outlook—Not the Canary in the Mine This Time, Housing Just Before 2020,” you indicated that the current signs of a slowdown in the housing market are different from what was observed just before the housing bust? How so?

Some, but not all, of the signs of a slowdown are the same. We currently have a slowdown in house price growth and a decline in home sales and construction: similar symptoms as in 2006-2007 before the outbreak of a full-blown financial crisis. However, there were three key elements in the prelude to the 2008 crisis that are missing today.

First, there is much less overvaluation of the housing market on a national level, even though individual markets such as Denver and the large Texas metro areas are overvalued. Currently, the level of U.S. house price indexes above their long-term trend (the trend being determined by consumer price inflation, real disposable income growth, and construction costs) is much lower than it was at its peak in 2006-2007.

Second, there is no deterioration in mortgage debt performance. On the contrary, mortgage debt service is doing fine: According to our data from Equifax, the overall rate of delinquency is almost at a record low. This good performance is not so much because the economy is going at full speed but because the combination of last decade’s foreclosures and more cautious lending over the past decade has reduced the number of risky borrowers, albeit at the cost of pushing down the share of homeownership.

Although it is questionable whether homeownership is a good financial investment in an absolute sense, it is a much better investment now than at the peak of the last decade’s housing bubble.

Because of these three missing elements—severe overvaluation, deteriorating mortgage service, and unbalanced price vs. return ratios—we do not believe that a house price correction is in the cards, and indeed our baseline forecast for the U.S. does not have any quarters of house price index decline.

You suggested that U.S. house prices are edging toward overvaluation. What does this mean for first-time homebuyers?

Increasing overvaluation correlates with reduced affordability for first-time homebuyers. The National Association of Realtors’ First-Time Homebuyer Affordability Index has recently fallen below 100 for the first time since 2007. That is, the median income of first-time homebuyer families is now less than 100% of the qualifying income for a median price starter home. While affordability is still better than at the peak of the housing bubble, it has been getting worse since 2012.

According to your forecast, the Fed will raise rates four times through 2019. How will this impact mortgage-debt performance?

The outlook for monetary policy has changed significantly since the December webinar, so it is worth describing how and why it has changed.

The Federal Reserve has pressed pause on this tightening cycle for the foreseeable future, and it almost sounded like the central bank believes it is over, or close to it. This differs from Moody’s Analytics forecast, which expects three additional 25-basis point rate hikes and puts the terminal rate at 3.25 percent for this cycle. A standout from the Federal Open Market Committee’s January statement was that the committee dropped any bias toward hiking rates. In December, members expected multiple rate hikes; now they are unsure of the direction of the next move. In fact, the bar for hiking rates was raised noticeably, and strong growth is no longer sufficient. During his news conference in January, Fed Chair Jerome Powell said that to justify a rate hike, he would need to see very strong growth that pushes the unemployment rate substantially lower. Powell added that inflation has to accelerate and inflation expectations need to increase.

Though the Fed has pivoted, it is adapting to recent developments in financial markets, heightened downside risks to the outlook, and an absence of inflationary pressures. Being patient and pausing this cycle within the range of estimates of the long-run neutral rate is appropriate and could extend the life of this expansion. The Fed has killed its fair share of expansions, but likely not this one.

Mortgage rates and other long-term rates react fairly rapidly if there is a sense that the policy position has changed, as was confirmed by the December Federal Open Market Committee meeting and then more strongly by the January press conference. As a result, mortgage rates fell perceptibly; the Freddie Mac 30-year fixed rate fell 40 basis points from November to January, and this has pulled down our mortgage rate forecast by about the same over the next year. While this change in the forecast will likely help prop up home sales and house price growth, it is too small to affect mortgage debt service, given that delinquencies are already at a cyclical low point. Overall, we don’t expect delinquencies to rise significantly over the next two years.

You mentioned that many economists refer to the yield curve as the infamous harbinger to the recession. Could you discuss this further?

Concerns about an inversion in the U.S. yield curve, which we define as the difference between the 10-year and three-month Treasury yields, are fueled by its reputation as a recession signal. Normally, 10-year yields are significantly larger than three-month yields due to the longer maturity period. Since the mid-1960s, cases of the yield curve inverting—that is, of three-month Treasury rates exceeding 10-year rates—have been nearly perfect in predicting recessions. On average, a recession occurs 15 months after the yield curve inverts.

This correlation is most likely due to two-way feedback. When short-term rates are larger than long-term rates, financial institutions have much less incentive to lend long term, but long-term loans to finance business investment and home purchases are what sustain the economy. Tighter long-term credit also makes it more difficult to refinance debt, making financial distress more likely. In the other direction, uncertainty over the economy can cause financial institutions to move their portfolios away from stocks and corporate bonds and into long-term Treasuries, so that a deteriorating economy acts to push down the yield curve.

However, a strong argument can be made that the relationship between the slope of the yield curve and the business cycle may have changed. For one thing, long-term rates are being depressed by a very low term premium and lower estimate (lower than in past cycles) for the long-run equilibrium Federal Funds rate, which is the main determinant of the three-month Treasury rate. Therefore, the yield curve will be flatter than in the past and could more easily invert, increasing the odds of a false recession signal.

What is the most rewarding aspect of your job?

I would say a lack of monotony; the challenges facing the U.S. housing market are seldom the same year after year. For example, in 2007, we had a glut of homes on the market, now we have a shortage of listings. Also, there are many parts of the U.S. economy, including construction, the rental market, monetary policy, and mortgage regulation to name a few, that overlap with housing analysis. As a result, I have to be constantly on my toes and learn new things from our mortgage market and monetary policy experts. Being a housing analyst is sometimes stressful but is never boring.

Previous: General Population Trails Servicemembers in Financial Well Being
Next: The Barriers to Buying a Home