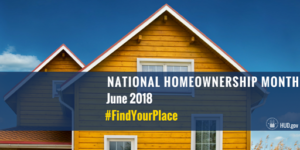 If you weren’t aware that June is National Homeownership Month, the U.S. Department of Housing and Urban Development aimed to change that on Thursday, kicking off a new media push and announcing their theme for the month: “Find Your Place.”

“Homeownership serves as an enduring symbol of security and prosperity, and it provides many Americans with a legacy they can pass down to their children and grandchildren,” said HUD Secretary Ben Carson. “During National Homeownership Month, we recognize the abiding value of owning a home, and we rededicate ourselves toward helping hard-working families to find their place in the American dream.”

In the media release, the department spotlights HUD’s legacy, stating, “Since 1934, more than 47 million households purchased a home with mortgage loans insured by the Federal Housing Administration (FHA). During the housing crisis of a decade ago, FHA played a critical role in keeping affordable mortgage financing available for millions of qualified borrowers. Today, home sales are at pre-crisis levels and home prices on the rise in most parts of the country as millennials make up the largest segment of first-time homebuyers. Through FHA and a national network of HUD-approved counseling agencies, HUD is working to make responsible homeownership a reality for millions of Americans.”

HUD also provides a quick snapshot of the state of both homeownership and how the department is working to promote it in 2018:

To see a short video of HUD Secretary Ben Carson reflecting on the legacy of the 1968 Fair Housing Act, click here.