Adrianne Todman has been sworn in as the 12th Deputy Secretary of the U.S. Department of Housing and Urban Development (HUD).

“Throughout my journey, I have made it my mission to help restore and revitalize our nation’s public housing; to help build more affordable homes in our country; to help house people who are homeless and to help families achieve their dreams,” said Todman. “At every step along the way, I have worked to safeguard the public’s trust-and to deliver support to people in need with efficiency and with equity.” 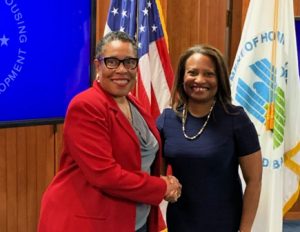 Todman most served as the CEO of the National Association of Housing and Redevelopment Officials (NAHRO) from 2017 to June 2021. During her tenure, Todman improved NAHRO’s financial standing and business operations, created a member-centric culture, and advocated for funding and policies to preserve and develop affordable housing and help communities thrive.

Before joining NAHRO, Todman served as the Executive Director of the District of Columbia Housing Authority (DCHA) from 2009-2017. At DCHA, Todman implemented a national model to house veterans experiencing homelessness, increased homeownership opportunities by 50% for low- and moderate-income families served by DCHA, increased the number of affordable units available in sub-markets experiencing rapid growth, and oversaw 12 concurrent large redevelopment efforts.

Deputy Secretary Todman also served in several career positions at HUD, first, as a manager of HUD’s $500 million grant competition that focused on the redevelopment of distressed public housing sites, then as a policy aide in both the Office of Public and Indian Housing, and the Office of the Secretary where she worked with staff across HUD’s programs on policy solutions and streamlining implementation.

In her role as Deputy Secretary, Todman will work alongside Secretary Fudge to ensure that HUD has the staff and tools it needs to administer and provide oversight over programs critical to supporting families and to moving the country forward.

Todman was born and raised in the U.S. Virgin Islands.

“NAHRO’s loss is our country’s gain. We are grateful for the fearless and effective leadership she brought to NAHRO, and for the many ways in which she strengthened our association,” NAHRO President Sunny Shaw said. “We are thrilled to see such an experienced houser and proven leader, with such a deep understanding of affordable housing policy and practice, serve as Deputy Secretary at HUD, and we look forward to working with her in her new capacity.”