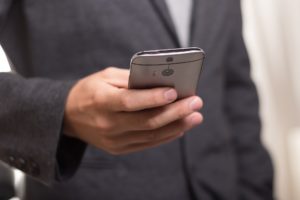 Real estate professionals are spending an increasing amount of time conducting business on their smartphones, according to a new report from the National Association of Realtors (NAR). About one-third of real estate professionals spend more than seven hours per workday on their smartphone or tablet, up from 18 percent a year ago, according to the 2018 Realtor Mobile Usage Report from NAR.

About half of that third estimate they spend more than nine hours per day on their devices. Also, 35.7 percent of real estate professionals use their mobile devices between four and six hours per workday. Fewer than five percent of real estate professionals say they use their smart devices less than one hour per day, and less than half a percent do not use a mobile device at all.

It’s not surprising then that an overwhelming majority—85.3 percent—of real estate professionals consider their mobile devices “very important” in their daily work and another 10.6 percent consider them “important.”

Tablets are popular but not universal among real estate professionals. About 34.8 percent of survey respondents said they do not use a tablet at all.

Apple devices are favored among real estate professionals with 70.4 percent saying they use an iPhone for their business. About 28.9 percent use an Android.

Half of the respondents said they use their devices to track mileage and business expenses, and nearly half rely on their mobile device’s camera.