Home / Daily Dose / Is Homeownership Living Up to Its Potential?

Is Homeownership Living Up to Its Potential? 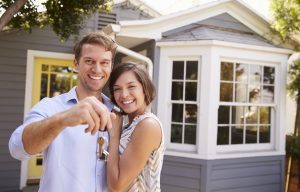 The homeownership rate is not living up to its full potential, or so says the First American Homeownership Progress Index, released on Monday. Demand for owning a home grew one percent over the year in 2017, according to the index.

To examine the cause of this mismatch, First American reviewed “critical lifestyle, societal and economic trends that influence the likelihood of renting or owning a home,” Fleming explained.

The current gap in potential demand versus actual demand can largely be attributed to lifestyle trends among young Americans. The millennial generation is pursuing higher education in larger numbers than previous generations and is delaying getting married and having children.

All of these factors impact a person’s likelihood of owning a home, according to the report.

“Homeownership is strongly correlated with marriage, and millennials are getting married later than earlier generations,” Fleming said. In fact, the rate is 30 percent higher among married couples than other types of households. Fleming pointed out that the median age for men and women entering a first marriage was about seven years more in 2016 than in 1960.

However, millennials are doing something that correlates strongly with owning a home, and that’s pursuing education.

“While important lifestyle decisions, such as marriage or owning a home, appear to take place later in life for millennials, they are getting educated in unprecedented numbers,” Fleming said. “As educational attainment levels increase, we can expect homeownership rates to eventually grow as well.”

Not only is there a correlation between education and homeownership, but it has grown over time. “The impact of education in relation to homeownership has nearly doubled in 10 years,” Fleming said.

The difference in homeownership rate between those with a college degree and those with no high school diploma was 11 percent in 1997. In 2017, the difference was 20.5 percent.

Fleming suggested, “it is reasonable to expect homeownership rates to grow as millennials continue to make important decisions, including attaining an education and, later in life, getting married and buying a home.”

“However,” he added, “the question remains: as millions of millennials look to purchase their first homes, will the housing market provide enough homes for them?”

First American pointed out the states with the most growth in potential homeownership demand in 2017 were Indiana (2.6 percent), Oklahoma (2.4 percent), Georgia (2.4 percent), South Carolina (2.2 percent), and Arizona (1.9 percent).

Previous: Fannie Weighs in on Homebuyer Sentiments
Next: The Consumers vs. Home Prices