The Latest in Homeownership 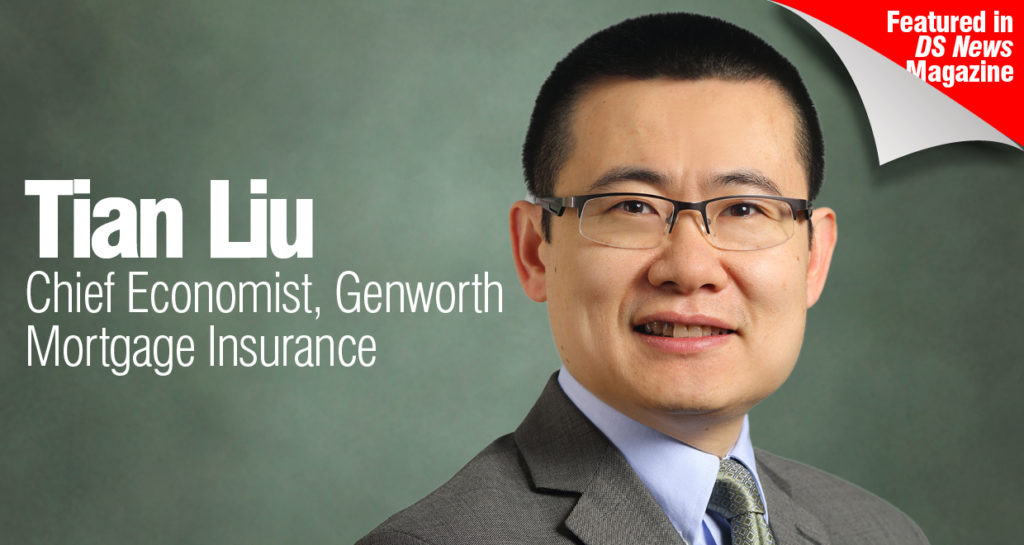 Editor's note: This feature originally appeared in the September issue of DS News, out now.

From authoring Genworth Mortgage Insurance’s Weekly Economic Report to leading industry surveys for lenders, Tian Liu is responsible for tracking the U.S. and regional economic trends. Liu began his economics career in the Australian Treasury Department in 1997 and started covering the U.S. housing market with Cemex in 2007, where he was the Director of Economics responsible for economics and housing market analysis. In 2011, he joined Owens Corning to lead its economics team. Liu joined Genworth Mortgage Insurance as its Chief Economist in 2014. He holds a master’s in economics from the University of Chicago and an undergraduate degree in economics from the Australian National University.

What are the factors impacting housing supply? Do you see this challenge continuing into 2019?

Inventory shortage has been going on for many years and a couple of factors are responsible for it. First, there has been a very low level of construction so far that has recovered only moderately over the past few months. Secondly, we haven’t seen that V-shaped recovery we saw in past cycles, resulting in a wide gap between demand and supply.

On the demand side, we are currently seeing a very strong housing demand partly because of the macroeconomic picture such as strong job growth that’s encouraging homebuyers to get back into the housing market. The millennial generation is also driving demand because they have reached an age where they are starting to have families.

The third factor affecting inventory is the shortage of repeat buyers. If you look at the type of homebuyers, repeat buyers sell the unit they’re living in to buy another one, creating a lower impact on inventory. On the other hand, a first-time homebuyer is moving out of their apartment or their parents’ or friends’ homes to start a new household. So the drain on inventory is bigger from a first-time homebuyer.

As a result of all these factors, while inventory is improving slightly with the rise in construction, more first-time homebuyers coming into the market, we don’t see a huge change in mitigating this challenge in 2019.

How do current housing market trends compare to what we have seen historically regarding growth?

The absence of a V-shaped acceleration in housing recovery is one of the main differences between this recovery cycle and the previous ones. We haven’t seen a broad-based recovery across all housing price points either. It has been strongest at the higher end of the price point, but looking at the lower end, such as homes below $200,000, the market segment hasn’t recovered as much.

According to our First-time Homebuyers Report published in May, we’re seeing a significant increase in first-time buyers over the last three years. Between 2014 and 2017, there has been a 40 percent increase in that market segment. At the same time, the repeat buyer segment has barely budged and is largely squeezed out of the market. Therefore, as soon as we have an adequate supply in the market, we could see a reacceleration from the repeat buyers because these homeowners have stayed in their homes for a long time. And their home equity has accumulated over the last few years.

Historically, when people accumulate a lot of home equity, they tend to upgrade their housing. But in this cycle, because of lack of inventory and competition from first-time homebuyers, they haven't been able to do that.

But we do see deceleration for the first-time homebuyers. This segment has seen such a tremendous growth in the last three years partly because of catch-up in the delayed household formation after the housing crisis. And partly because of demographics, such as the millennial homebuyers.

What are the drivers to get more millennials into the housing market?

The first driver is educating millennials on their borrowing options. One myth that we continue to see in the market is that you need a large amount of down payment to become a homeowner. For example, many first-time homebuyers are unaware that with a conventional mortgage, you can go down to as little as 3 percent down payment. Today, FHA loans are the most popular option for first-time homebuyers and are in fact the largest product for this segment, followed by conventional loans with mortgage insurance. The latter is the fastest-growing market segment in the mortgage industry. That’s a very important driver because we have seen that down payment and getting a mortgage loan are some of the biggest hurdles faced by first-time homebuyers.

Secondly, it is important to educate millennials about the housing options available for them and what will suit them in the long- and short-term. For example, If they’re planning to stay at a location for a short period then it is better to rent. However, if a buyer is thinking of starting a family and settling down then homeownership looks a lot more attractive, just because they have the appreciation in home prices working for them over a longer period.

Prices are the third driver. Millennials are part of a large generation, and whenever you have a large generational cohort like this one coming into the market, they tend to compete against themselves and create a demand pressure that tends to drive up home prices. In that sense, it is better to buy early than later.

How have homeownership trends changed regarding diversity over the past decade?

There’s been an increased focus on thinking about how we can responsibly expand the credit box and make affordable products available to all current and prospective homeowners. We view this as a necessary step towards continuing to drive America’s housing market, which is central to our country’s economy.

What can we expect from the market moving to the last quarter of 2018?

Inventory will remain a challenge for the rest of the year and will likely be flat by the end of 2018. An important exception will be the strong sales of new homes, which will continue to increase between 10 percent and 15 percent as homebuilders increase their production. Regarding home prices, we will continue to see a 6 percent to 7 percent home price appreciation, partly because of strong demand and also because we still don’t have as much new construction as we should.

The increasing costs for home builders from the tariffs that have been imposed have become more and more relevant to the overall housing market in the last few months and are contrary to what we want to see from policymakers, which is making housing more affordable.

Regarding homeownership, we expect 1 percent increase year-over-year for the rest of 2018, with the recovery being the strongest among young households that ties into millennials coming into the housing market.

Previous: The Industry Pulse: Updates on Ellie Mae, RoundPoint Mortgage, and More
Next: The Lasting Impact of Hurricane Harvey on Housing